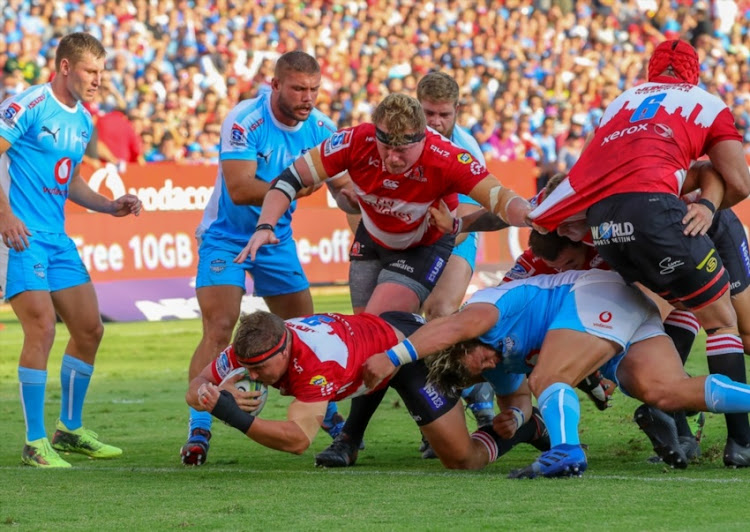 Ruan Dreyer of the Emirates Lions scores during the Super Rugby match between Vodacom Bulls and Emirates Lions at Loftus Versfeld on March 03, 2018 in Pretoria.
Image: Gordon Arons/Gallo Images

Lions scored seven tries to beat the Bulls 49-35 during their lively Jukskei derby played in Pretoria on Saturday afternoon.

This humbling defeat by their bitter rivals is a timely reminder to the Bulls, who won their opening match against the Hurricanes last weekend, that they are still some way to go in this Super Rugby campaign.

Their work for most parts of the afternoon was lethargic as they forgot the basics needed to survive at this level and they were dully punished by last season’s losing finalists who have now won their opening three matches.

It does not get any easier for coach John Mitchell as they travel overseas on Sunday to face the Reds, Chiefs and defending champions Crusaders over the next three weeks before returning home to host the Stormers at the end of the month.

It is also worth noting that they were fund wanting in terms of discipline as they lost Conraad van Vuuren and Nic de Jager, who conceded a penalty try, in quick succession in the second half to make their mission of a comeback almost impossible.

During the game, Bulls were the first team to points on the board when Marnitz Boshoff scored a penalty but it was the Lions who scored the opening try of the afternoon through Ruan Dreyer which was converted by Elton Jantjies.

Later, the Lions touched down again through Jacques van Rooyen after they overpowered the Bulls defence with a strong driving maul with Jantjies converting.

After the second Lions try, Bulls upped their attacking tempo and they won a penalty in the 22nd minute which was put away by Boshoff.

Just before the half hour mark, Bulls won another penalty in front of the poles and Boshoff made no mistake with his third successful kick of the afternoon but Lions scored the third try from Marvin Orie with Jantjies converting.

Bulls responded soon after with their first try of the afternoon through Johnny Kotze but Boshoff failed to convert as the Lions went to the half time break leading 21-14.

Bulls started the second half on a positive note when Handrè Pollard touched down next to the corner flag for Boshoff to register his first conversion.

Lions responded through a try by Malcolm Marx and Jantjies converted as they retook the lead but things went from bad worse when Bulls lost Van Vuuren and De Jager to the sin bin within two minutes of each other.

With numerical advantage, Lions later drilled their sixth and seventh tries through Sylvian Mahuza and Ross Cronje, which were converted by Jantjies, before Lizo Gqoboka and Travis Ismael scored two late tries which proved to be a scant consolation.