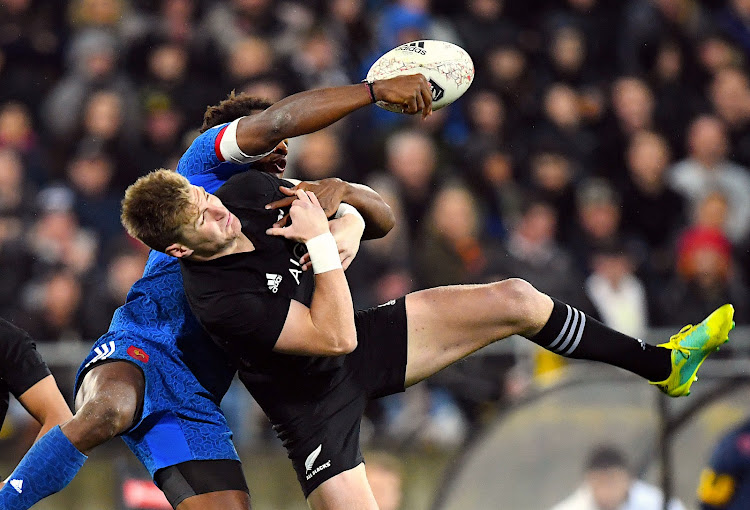 An early red card to France fullback Ben Fall ensured the All Blacks sealed a 26-13 victory in the second test at Wellington Regional Stadium on Saturday and wrapped up the three-match series with a game to spare.

Fall, who arrived late in New Zealand due to the Top 14 final and missed the 52-11 first test loss, was sent off by Australian referee Angus Gardner in the 12th minute for taking out All Blacks flyhalf Beauden Barrett in the air.

Barrett landed on his head and after checking the incident with television match official George Ayoub, Gardner said he had "no choice" but to issue the red card.

Prior to the red card, the visitors had dominated the opening exchanges, with flyhalf Anthony Belleau and the loose forward trio of Kevin Gourdon, Kelian Galletier and Mathieu Babillot punching holes in the All Blacks' defence.

One of Galletier's penetrating runs created space for Geoffrey Doumayrou to cross the line only for television replays to show he had dropped the ball while trying to score.

Morgan Parra gave France the lead with an 11th minute penalty then the game effectively ended after Fall was sent off while chasing a high kick from the restart.

The world champions, who typically do not need a numerical advantage to run up points, however struggled to take control of the game with poor individual execution and sloppy team work in the face of a galvanised French side.

The All Blacks' managed to score tries to prop Joe Moody, wing Ben Smith and two to fullback Jordie Barrett, whose first five-pointer only came from a sweeping counter-attack in the final minute of the first spell to give them a 21-6 lead.

Clearly disappointed with his starting side's performance in the first half, All Blacks coach Steve Hansen went to his replacements bench early in the second spell, but the game still struggled to get any momentum.

Damian McKenzie, who had replaced Beauden Barrett after he failed the head injury assessment, finally sparked the game back into life when he put the younger Barrett in for his second try.

France, however, continued to dominate territory and possession and Gardner finally lost patience with the All Blacks persistent infringing, with replacement scrumhalf TJ Perenara sinbinned for conceding the latest penalty.

It looked like France might have finally got some luck when replacement hooker Pierre Bougarit crossed to score what looked to be a try on test debut but Ayoub ruled it out for a double movement.

For the visitors, replacement prope Cedate Gomes Sa finished off a sweeping movement after the fulltime hooter.