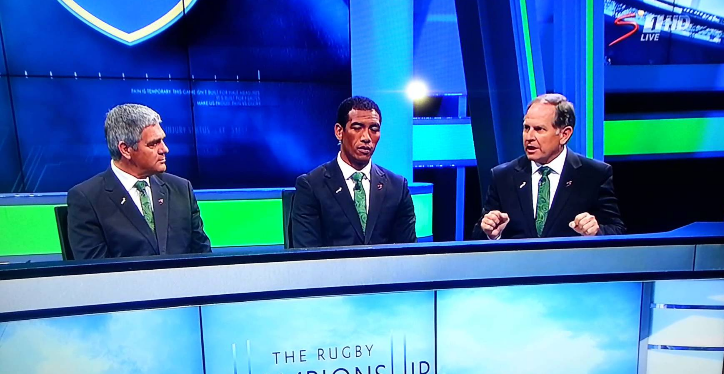 SuperSport's rugby analysts Nick Mallett (L), Ashwin Willemse (C) and Naas Botha doing a live studio analysis. The trio was put off air after a controversial scene in which Willemse walked off studio during a live analysis.
Image: YouTube screengrab

It will be Mallett's first appearance since Ashwin Willemse walked out on his fellow panellists Naas Botha and Mallett at the SuperSport studios in Randburg after a Super Rugby game between the Lions and the Brumbies at Ellis Park Stadium on May 19.

SuperSport spokesperson Clinton van der Berg confirmed to TimesLIVE on Thursday that Mallett is scheduled to be part of Saturday's Super Rugby matches to be played in Johannesburg and Durban.

The Lions host the Bulls in a Gauteng derby at Ellis Park while the Sharks welcome the Jaguares at Kings Park.

The Sharks haven't quite been the masters of their own destiny this season and that partly explains why they find themselves in a difficult Super ...
Sport
3 years ago

“He (Mallett) is scheduled for this weekend’s local Super Rugby matches but Naas (Botha) and Ashwin (Willemse) will not be joining him in the studio‚" said Van der Berg.

"Naas worked last weekend and he is not booked for this one.

"The issue of Ashwin remains unresolved and it has been handed over to the Human Rights Commission.”

Willemse‚ who represented the Springboks in 19 tests between 2003 and 2007‚ spoke of being labelled a “quota player” and refused to be “patronised by two individuals who played in an apartheid/segregated era”.

Willemse said in a radio interview this week that he has decided not to pursue an Equality Court case against SuperSport.

Speaking on 702 and CapeTalk on Tuesday‚ the 36-year-old 2007 Rugby World Cup-winning squad member said he had now instructed his legal team that he was prepared to participate in a Human Rights Commission hearing about his walkout on live television in May.

He also said he had not ruled out returning to SuperSport as a rugby presenter and pundit alongside Botha and Mallett.

With the Super Rugby league stage reaching the finishing line on Saturday‚ there’s still plenty to play for.
Sport
3 years ago