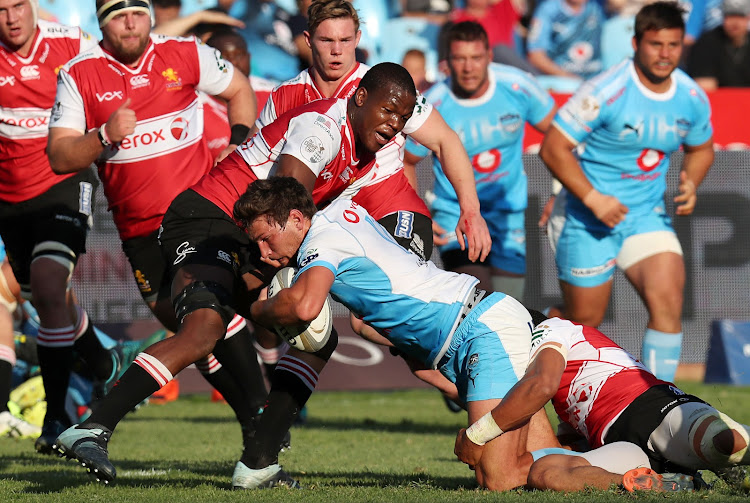 JT Jackson of the Bulls is tackled by Hacjivah Dayimani of the Lions during the Currie Cup match between Blue Bulls and Golden Lions at the Loftus Versveld Stadium, Pretoria on September 1 2018.
Image: Muzi Ntombela/BackpagePix

Just when it seemed the Golden Lions were staring down the barrel their gifted No8 Hacjivah Dayimani forced his will on proceedings.

Back to back tries helped hand his side take the lead with just under10 minutes to go, before his steal at the ruck with the Bulls hot on the attack in the closing minutes, proved an even timelier intervention.

Dayimani’s first try was testament to his ability to rid himself of defenders when he has a bit of space.

With seemingly no-where to go next to the Main Stand touchline, he shimmied and sped around Duncan Matthews as he didn’t exist.

His second came as a result of sustained attack and a deft pass from flyhalf Shaun Reynolds. It helped too that the Lions’ bench made an impact as the Bulls only added seven points to their first half tally.

It condemned the Blue Bulls to their second consecutive Currie Cup defeat which would considerably have lengthened the odds on them securing a berth in the semi-final, let alone hosting one.

This was a game that showcased endeavour by the bucket load but as a consequence, the spillages were never far away, particularly in the first half.

The ball was turned over with such alarming regularity that neither side was able to take it through the phases.

Ordinarily that would make for a frustrating stop-start affair, but both defences were so porous that the first half still yielded seven tries.

All too often the ball carrier’s appeared to be in a cul-de-sac only for the generous defence to smooth the path to the motorway.

On top of that the Lions, at the break, would have reflected on a first half in which they richly contributed to their half time deficit.

Costly errors in their own half served to undermine the visitors as the home side capitalised with three of their four tries before halftime.

The Blue Bulls to be fair, increasingly eked out valuable metres through their forwards, and coupled with the Lions’ propensity to squander possession they got a foothold.

While loosies Ruan Steenkamp and Handro Liebenberg harangued the visitors, the Bulls’ rolling maul also got the Lions’ back pedalling. In fact, when the Bulls kept the ball under the cover of their forwards they looked most dangerous.

Just as the Lions met reward for their assertive start through a try for Reynolds, a lapse at the ruck from the restart let in the Blue Bulls. Another lapse cost them another seven pointer seven minutes later when Reynolds allowed himself to be dispossessed in the shadow of his team’s uprights.

The Lions frequently squandered positions of promise and their cause may well have been lost had Manie Libbok not hit the right hand upright from a long range penalty in the 60th minute.

That, however was just about the time the Lions’ bench was pressed into action. They gave the Lions more traction and it gave Dayimani the space.

SA Rugby president Mark Alexander has said their organisation hasn't woken up too late to the need of having private equity partners to sustain elite ...
Sport
3 years ago

Springbok coach Rassie Erasmus has made a bold and popular call by bringing in French-Based utility back Cheslin Kolbe for the Rugby Championship ...
Sport
3 years ago