Ashwin Willemse surprised by SuperSport's announcement of his contract expiring 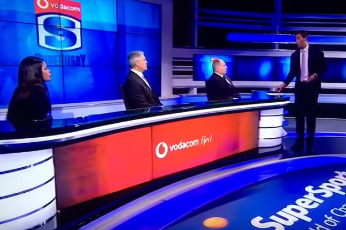 A screengrap of former Springbok SuperSport TV rugby analyst Ashwin Willemse walks off set during a live broadcast of the Super Rugby match between the Emirates Lions and Australia's Brumbies on May 19 2018.
Image: YouTube screengrab

Former Springbok winger and SuperSport presenter Ashwin Willemse said on Thursday he was not aware of his commentary contract expiring with the pay-channel.

SuperSport announced on Thursday that Willemse‚ who was at the heart of a studio walkout that involved former Springboks Nick Mallett and Naas Botha after a Super Rugby match between the Lions and the Brumbies at the Emirates Airline Park in Johannesburg on May 19‚ will not be back on air.

“You are calling me in regards with something that I haven't read and I don't know what you're talking about‚” Willemse told TimesLIVE.

Through a statement from their communication co-ordinator Sandile Luthuli‚ SuperSport confirmed that Willemse's contract with the pay-channel has expired and he will not be back on air.

However‚ detailed questions were forwarded to SuperSport in regards with the expiry date of Willemse and the length of Willemse's contract were not accurately answered.

“Ashwin Willemse’s contract with SuperSport has expired and he will not be back on air‚" the statement from Luthuli read.

"We have not heard from the Equality Court.

"We are in communication with the SA Human Rights Commission.

"We referred Advocate Vincent Maleka SC’s report to the Commission‚ in accordance with one of his recommendations following his independent review of the matter.”

In the June 19 press conference where SuperSport chief executive officer Gideon Khobane presented the findings of the Maleka report‚ Khobane said Willemse's contract wasn't terminated and the former Springbok did not terminate his contract with them.

Willemse spoke of being labelled a "quota player" during the May 19 walkout and refused to be "patronised by two individuals who played in an apartheid/segregated era".

The 2007 Rugby World Cup winner went on to say he "can't work with people who undermine other people" and that he was "glad it happened on live TV so that people can see".

In a subsequent inquiry undertaken by Advocate Maleka SC to look into the matter while the analysts were taken off air‚ Mallett and Botha were cleared of racism allegation and have resumed their studio work for SuperSport.

Willemse did not take part in the inquiry and said the matter will be taken up with the Equality Court.

Springbok coach Rassie Erasmus says the inclusion of Elton Jantjies in the starting line-up for Saturday's Rugby Championship clash against ...
Sport
3 years ago

Boks go for late training ahead of Australia clash in Brisbane

The Springboks have used as much science as possible to be ready for Saturday’s night time kick off against the Wallabies in Brisbane.
Sport
3 years ago