All Blacks grab dramatic win against Springboks in Pretoria 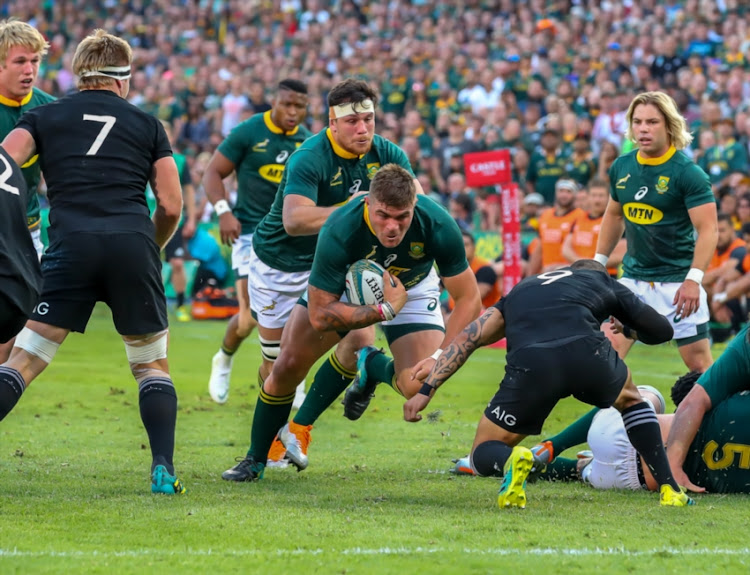 Malcolm Marx of the MTN Springboks on the drive during the Rugby Championship match between South Africa and New Zealand at Loftus Versfeld on October 06, 2018 in Pretoria, South Africa.
Image: Gordon Arons/Gallo Images

Loftus will have to wait a little longer to witness a Springboks win over New Zealand since 1970.

On Saturday, the Boks came close to ending their 48 year wait only to be outdone by a late try from Ardie Savea on the stroke of full time that tied the match 30-30 with substitute flyhalf Richie Mo’ounga kicking the decisive that gave the All Blacks a narrow 32-30 victory.

With about 20 minutes to go, the Springboks looked to have the match under control but they allowed this hugely experienced All Blacks side through the back door who scored two unanswered tries from the 61st minute Rieko Ioane and Savea.

This defeat also means that the Springboks have failed to register first back to back win over New Zealand since 2009 where they beat them in Durban and Hamilton under former coach Pieter de Villiers.

The All Blacks came into match having already won this tournament but they were not reckless in their application and game management and they finished their season on a high note having only lost one match the entire competition.

This result has also denied the Boks their third Test win in succession and they will have to raise their game for the end of the year tour where they are up against England France, Scotland and Wales in Europe in November.

South Africa, who were 12-0 down inside sixteen minutes during the corresponding fixture in Wellington three weeks ago from tries by Jordie Barrett and Aaron Smith, took an early lead from the boot of Handrè Pollard who scored two penalties.

New Zealand, who had been under pressure from the home side during the opening exchanges and were forced to concede penalties, but they recovered to narrow the score line to three points from the boot of Beauden Barrett from long range.

Barrett slotted his second penalty of the afternoon after 35 minutes and there was no further addition to the scoreboard as they went to the break tied 6-6 but the Springboks looked the better side as they dominated possession and territory.

The Springboks started the second half in the best possible way as Jesse Kriel scored the first try of the afternoon after he got the better of Ryan Crotty on the edge of the try line with Pollard managing to find the middle of the poles with his conversion in the 43rd minute.

It got better a few minutes later when Damian de Allende forced his way through the New Zealand defence to extend South Africa’s lead after he got the ball from captain Siya Kolisi leaving Pollard with an easy job of converting in front of the poles.

The All Blacks were not going to lie down and be dictated to by their hosts and they registered their first try of the afternoon through Smith with B Barrett converting as they narrowed the gap to just ten points.

As soon as the All Blacks forced their way into the match, the Boks pulled away again through a try by Cheslin Kolbe with Pollard continuing to shine with the boot as he slotted his sixth kick at goal on the afternoon.

The Boks were punished for sloppy defence in the closing stages by the dangerous Rieko Ioane and Ardie Savea to deny the Springboks what could have been a memorable win over their old foes.