Herschel Jantjies sparkled with a brace of tries to help the Springboks to a hard fought 35-17 win over Australia in the first match of the Rugby Championship at Ellis Park in Johannesburg on Saturday night.

Given an opportunity to start by coach Rassie Erasmus together with Rynhardt Elsradt and Lizo Gqoboka  from the bench, the nippy scrumhalf repaid the faith shown in him with a stunning performance as this largely experimental Bok team registered the much needed victory.

With this win, the Springboks have ensured that the Wallabies will have to wait longer for a Test victory at Ellis Park as their last win here in Johannesburg was back in 1963.

It will also give the Boks momentum going into the mammoth clash against the All Blacks in Wellington next weekend, even though Erasmus is going to field a considerably changed side.

Jantjies was not the only player to shine on the chilly Johannesburg night. The likes of stand-in captain Eben Etzebeth, Elton Jantjies, Trevor Nyakane, Lood de Jager, Sbu Nkosi and Jesse Kriel also put in a commendable shift.

South Africa were the first to register their name on the scoreboard when debutant Herschel Jantjies touched down next to the poles after he received a pass from winger Nkosi 11 minutes into the game.

Australia replied with a penalty from the boot of Bernard Foley. A few minutes later, Lukhan Salakaia-Loto breached the Boks' defence with a surging run to score a try, but the TMO ruled that Samu Kerevi’s pass went forward in the build-up. 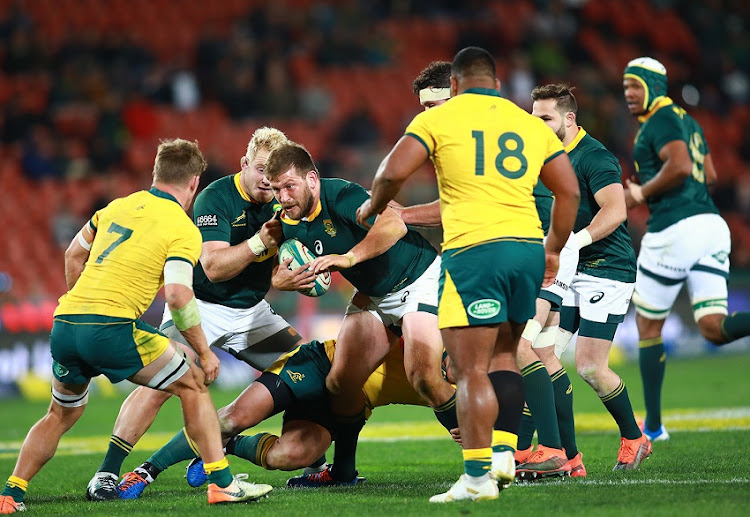 Frans Steyn of the Springboks tries to break away from Wallabies players during their championship rugby encounter at Emirates Airline Park
Image: Masi Losi

South Africa lost Andre Esterhuizen to the sin bin after 20 minutes for a high tackle but their numerical disadvantage did not affect them too much as Lood de Jager touched down following a break down on the wing three minutes later.

Australia finally made use of the one-man advantage when Dane Haylett-Petty scored their first try out wide shortly before Esterhuizen returned to the match.

Australia returned from the break with more purpos,e but their good attacking work was undermined by Taniela Topou when he was shown yellow for a shoulder charge into the ruck after 35 minutes and they were punished immediately.

South Africa went for a scrum and after a brief period of sustained pressure Nkosi pulled away on the wing to touch down their third try of the night as they increased their advantage to eleven points.

Elton Jantjies, who was deputising for Handre Pollard, returned with eight points with the boot as he scored all the four conversions and missed one penalty. His opposite number Foley managed 12 points from a try, two conversions and penalty.

Herschel Jantjies scored his second try in the closing stages before Foley touched down but it proved too little too late as the Boks got their campaign off to a satisfying start.