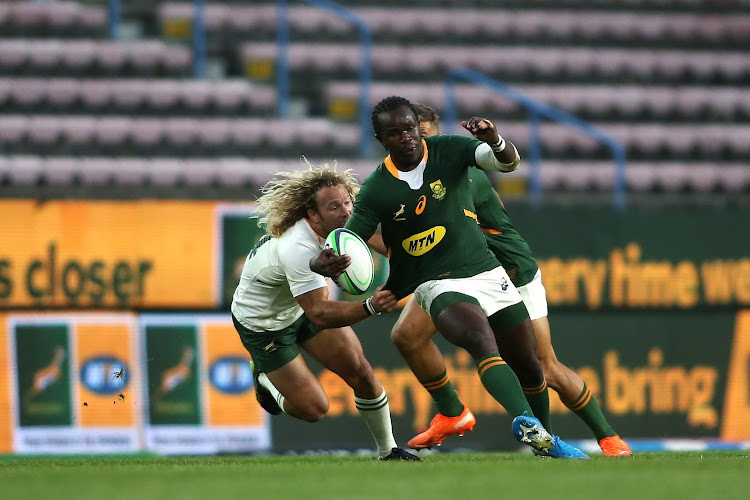 Sharks coach Sean Everitt may have picked a mixed, but well balanced match-day 23 for Friday’s Super Rugby opener against the Lions at Kings Park, but he’s already warming up to what new recruit Yaw Penxe brings to the party.

The former Southern Kings pace merchant has been recruited by the Sharks on a short-term basis and won’t be playing this weekend.

Everitt went for experience on the wings with JP Pietersen and Werner Kok, but will push through to start at some point.

Makazole Mapimpi is in Japan while S’bu Nkosi and Madosh Tambwe are nursing their way back from injuries and with the Springboks also set to travel to Australia for the Rugby Championship, Penxe won’t be lost in the system.

“We feel that Yaw is a player who really shined in the Pro14. He did a damn good job at the Springbok Showdown on Saturday.

"He nearly had a try-scoring opportunity that was set up by Sanele Nohamba, but a player like him can add huge value to the Sharks,” Everitt said.

“It’s unfortunate that we’ve had injuries in that position. Mapimpi’s left for Japan and he’s arrived there safely.

"We’re happy for him, while Nkosi is two to three weeks away while another week will do Madosh good.”

With the Lions picking a beefy pack that includes Jaco Kriel, Len Massyn, Vincent Tshituka and Willem Alberts, the Lions have already shown their physical hand.

This wasn’t lost on Everitt, who said they’ve planned well for the Lions.

“The Lions squad has changed quite a lot since the beginning of the year. They bought in a number of players, some of them are experienced, during the lockdown period.

"They’ve gone for a big centre combination in former Bulls captain Burger Odendaal and Dan Kriel. For this particular game, they’ve moved away from their DNA centred on ball continuity,” Everitt said.

“They’ve moved Willem Alberts to lock and pick three bigger loose-forwards than they normally do so in the past. We’re expecting something different from them, but we’re prepared for it.”

How effective will the Lions lung-busting style be against SA opponents?

The high tempo game that helped propel the Lions to three consecutive Super Rugby finals won't necessarily be fitted with brakes when they ...
Sport
1 year ago

Now that the pre-season is out of the way‚ all eyes shift to the Springboks’ readiness for next month’s Rugby Championship.
Sport
1 year ago

Elton Jantjies warms to the challenge of a new competition

By the sheer weight of his statistics‚ Elton Jantjies is one of Super Rugby's brightest stars.
Sport
1 year ago

The All Blacks are expecting the Wallabies to bring a "physical" edge to their game under new coach Dave Rennie in Sunday's season-opening Test in ...
Sport
1 year ago