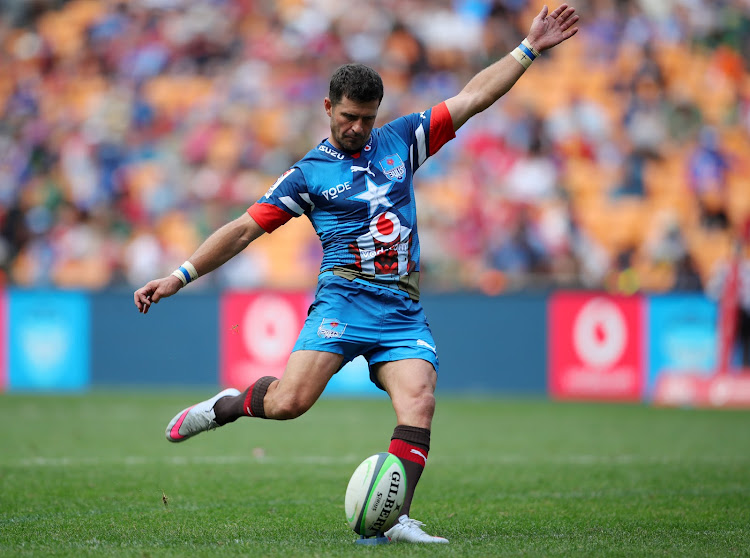 Morne Steyn of the Bulls during a match against the Lions at FNB Stadium, Johannesburg, on January 19 2020.
Image: ©Samuel Shivambu/BackpagePix

Former Springbok flyhalf Morné Steyn has predicted a great future for most of the players he has seen at Loftus as they continue their development at the Bulls.

The exploits of 22-year-old David Kriel and 21-year-old Elrigh Louw‚ who are among a group of talented young players that are emerging at the franchise‚ have impressed the vastly experienced Steyn.

“I must say that we have quality players [here at the Bulls] and a couple of youngsters like Elrigh Louw‚ who is about 21 or 22 years old‚ and he is already playing like one of the senior players.

“There is also David Kriel at the back as well‚ who is about the same age. He is so mature as a player and I think he will play for the Springboks one day. He (Kriel) is young by age but for me he is one of the senior players in the team.”

Bulls thrash hapless Sharks by four tries to none

With this hard-fought but ultimaely comfortable 43-9 bonus point victory over the Sharks during their top-of- the-table Rainbow Cup SA clash at ...
Sport
6 months ago

The Bulls demolished the Sharks 43-9 last week and produced a strong second half performance that delivered three unanswered tries to open a three-point lead at the top of the table.

“I also spoke to Fourie du Preez‚ who was working with the number nines‚ and he said our second half performance on Saturday against the Sharks was the best he has seen in a long time.”

Asked if the current side coached by Jake White can emulate the dominant teams of the late 2000s that won three Super Rugby titles in 2007‚ 2009 and 2010‚ Steyn said their playing styles and game plans are different.

“Compared to those sides of 2007 to 2010‚ it’s a bit of a different game plan that we are playing now. But the quality of the players and youngsters coming through the system says there is a bright future ahead for the Bulls.”

The Lions left to lick wounds after another deflating defeat

Their 39-37 defeat in the Rainbow Cup SA against the Stormers will be hard to stomach for the Lions.
Sport
6 months ago

The Bulls have won their opening three matches in the Rainbow Cup and they face the winless Lions at Ellis Park on Saturday, looking to solidify their position at the top of the standings.

“It’s going to be a tough one.

“I think they are keen for a win [and] it has been close for them over the last couple of games. The Jukskei derby is always a tough one and we can’t afford to take them lightly.

“We must just focus on what we want to do and execute our plans 100%. We must focus more on ourselves than the Lions.”