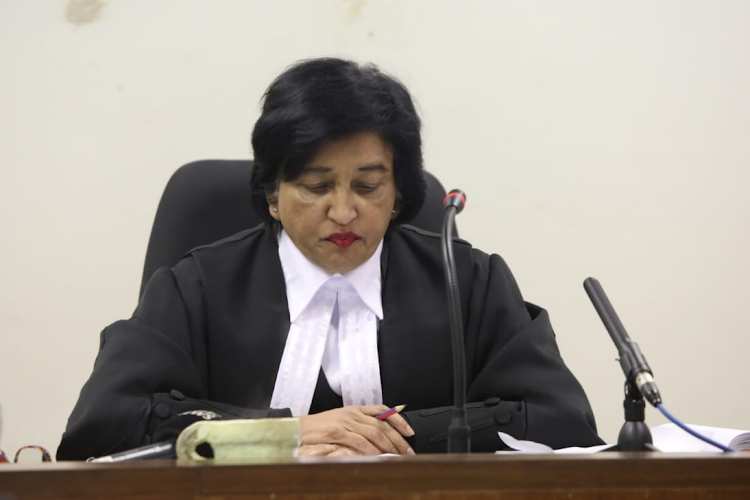 The treatment of judge Dhaya Pillay at the recent JSC interviews has been slammed by 82 advocates of the KwaZulu-Natal Society of Advocates, in their personal capacities. File photo.
Image: Sandile Ndlovu

In an unprecedented move, 82 members of the KwaZulu-Natal Society of Advocates have, in their personal capacities, slammed the treatment of two local judges at the recent Judicial Services Commission (JSC) interviews.

In a statement, they said both judges Dhaya Pillay and Piet Koen did not deserve to be treated in this “unfortunate manner”.

“Overall this statement is advanced out of a concern that on account of the JSC interviews, the public may perceive that the two judges are somehow not worthy of their judicial positions.

“We think we have a duty to correct any such perceptions because, in our experience of appearing in court before them, there is no foundation to them.”

Pillay, who applied for a post on the Constitutional Court, was grilled by EFF parliamentary representative Julius Malema and then chief justice Mogoeng Mogoeng, over her friendship with finance minister Pravin Gordhan.

After Malema raised the issue, Mogoeng then caught her completely off guard by mentioning that some years earlier, when she was being interviewed for another post, Gordhan had had a meeting with him “about a fiscal issue” and had asked him: “How did my friend Dhaya Pillay perform?”.

Mogoeng said: “We had just announced the results, it was public knowledge that you did not make it. This thing has stayed with me. It got renewed as Malema engaged you.”

Pillay, who has known Gordhan for many years through the anti-apartheid struggle, said that it must have come up in casual conversation.

“I know he would not promote me or any of his friends, specifically because of his high profile and that he would be accused of this. That is the extent to which I know. I would not rely on him to promote me at all. And our boundaries have been strictly observed. I can only say again, that he asked you in passing relating to other business and he was disclosing to you that he is my friend, which is no secret.”

Mogoeng also went for Koen’s jugular when he accused him of being rude to him at a meeting to discuss cost-cutting measures in the judiciary in 2016.

He said: “You were one of the leading voices in that meeting. It was one of the most unfortunate meetings a judge should ever have and I am putting that in the lightest possible way.

“I left the meeting deeply concerned about how the judge president will ever be able to run a division like that. I was deeply concerned how you treat the advocates that appear before you. Litigants and witnesses, and members of the public.

Chief justice Mogoeng Mogoeng lashed out at KwaZulu-Natal judge Piet Koen on Wednesday for being “rude” and discourteous to him at a meeting to ...
News
9 months ago

Koen responded by saying he had read the transcript of the meeting and “I respectfully submit that the contents thereof were not intended to be rude”.

“But perception is important. And if it was construed as such I am very saddened and I apologise unreservedly.”

TimesLIVE has been told that Mogoeng got it wrong and had confused Koen with another judge.

The advocates, including at least 10 senior counsel, said in the statement that the manner in which Pillay was interviewed had already generated “robust criticism”.

One columnist had called it “a disgrace”.

“As members of this Bar, we express our shared concern with the unfortunate manner in which judge Pillay was treated — a judge who in our experience is robust, independent and who has graced both the Supreme Court of Appeal and the Constitutional Court as an acting judge.”

They said while they were not party to the meeting that gave rise to the accusation that  Koen had been rude and discourteous, they could all say that in their experience he was the opposite of rude.

He knows full well that if he is booted out after his own looming hearing, it will besmirch any ruling on public protector
Opinion & Analysis
8 months ago

The Judicial Conduct Committee will meet on June 12 to recommend to the Judicial Service Commission whether a complaint against two judges appointed ...
News
8 months ago

During his solitary and rambling appearance before the Zondo commission, Jacob Zuma was allowed to scour the inner recesses of his mind for all the ...
Opinion & Analysis
9 months ago