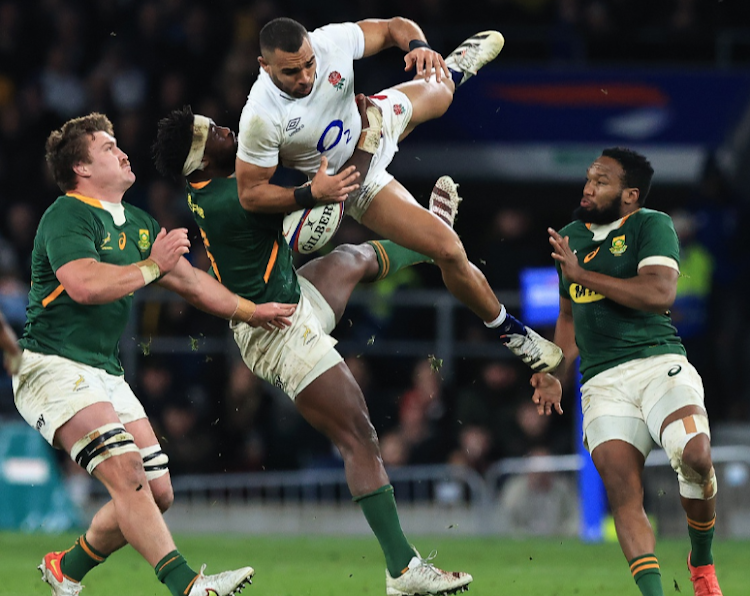 Joe Marchant of England is tackled in the air by the Springboks' Siya Kolisi. The tackle earned the Bok captain a yellow card at Twickenham.
Image: David Rogers/Getty Images

They may have continued the habit of outscoring their opponents in the second half but the Springboks were left to rue their lack of decisiveness at the death when they slipped to a 27-26 defeat to England at Twickenham on Saturday.

Coach Jacques Nienaber was left to lament his team's inability to close out the contest after the Springboks rallied back from 17-6 in the first half.

“We need to find ways to close games out. We have to look at that as coaches,” admitted Nienaber.

“This is the third time this year that we have lost the game when we’ve been leading by one or two points up to the 79th minute, so it’s very disappointing. It’s something that we’ll have to look at and improve on.”

They were less than convincing in the first half too when they failed to deploy their much vaunted scrum and fumbled at the line-out. Their inability to break down the opposition defence from structured play in the red zone again haunted them but matters were compounded by uncharacteristic lapses in defence.

“It was very disappointing and very out of character. We don’t normally concede from a set piece and it wasn’t something we were prepped for,” said Nienaber about the 65th minute try by Raffi Quirk that proved crucial.

“Players make mistakes and we will never judge a player on a mistake. Nobody goes out to purposely make a mistake. We judge on a player’s attitude and what they show on the field, as well as their work rate — things they can control.

“Sometimes we miss a tackle and get a read wrong, and things like that happen, but it’s something we need to fix. Conceding three tries doesn’t sit well with us, especially as we normally average less than one try per game during a season. That’s my department and we need to fix it.”

The defeat means the Boks have a record of eight wins from 13 Tests this year. “I told the team in the change room afterwards that they’re better than our winning percentage this season (61.5%), which is skewed by the loss of those close games,” said the coach.

After missing out on their 2020 playing roster the Boks had to play catchup this year with a view to the 2023 Rugby World Cup in France.

While they displayed many of their much feared characteristics they did not advance their game with ball in hand. While the Boks proved adept at scoring tries from deep, they are less decisive when they get into the red zone.

Concerns and the cavalry

“I don’t want to go into detail but there are things that we want to work on. Our execution of opportunities can be better for one. The good thing is, we have one and a half years to improve going into France 2023,” said the coach.

The coach will also have to make big calls with regards to the personnel he wants to take forward to that event. Vastly experienced campaigners with more than 50 caps like Eben Etzebeth, Siya Kolisi, Trevor Nyakane, Damian de Allende, Frans Steyn, Steven Kitshoff and Lood de Jager played with a spring in their step this year.

The Boks didn't see the best of Willie le Roux and Duane Vermeulen, but the latter, in mitigation, did come off debilitating injury. He may be 35 but it would be brave to write him off.

On the plus side, the Boks can look forward next year to welcoming back, the then hopefully well recuperated, Pieter-Steph du Toit, Frans Malherbe, RG Snyman, Faf de Klerk and Cheslin Kolbe. They, like director of rugby Rassie Erasmus, were sorely missed at Twickenham.

The Springboks hoping to go undefeated for the first time on an end of year tour since 2013, came up short against an old and redoubtable adversary.
Sport
1 week ago

Rassie’s DNA embedded in the Springboks

Rassie Erasmus may be banned over the next nine Tests but every play will have his fingerprints all over it.
Sport
1 week ago

Boks' re-emergence came at a price

The Springboks may have won two-thirds of the Test matches they played before this weekend's clash against England but it has been a year that has ...
Sport
1 week ago