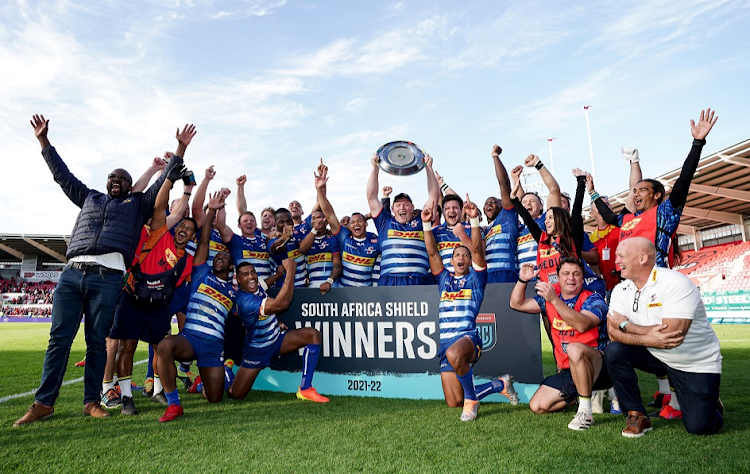 The Stormers, here celebrating winning the SA Shield of the URC, along with the Bulls will be ranked in Tier One of the Champions Cup draw.
Image: Robbie Stephenson/INPHO/Shutterstock/BackpagePix

The Stormers and Bulls will benefit from their top-tier ranking when the draw for next season's Champions Cup is made on June 28.

The Stormers and Bulls by virtue of their qualification for the final of the URC will go into the draw as Tier One teams along with the top two qualifiers from the Premiership and the Top 14.

The clubs will be divided into two pools of 12 (Pool A and Pool B) and the tournament will be played over eight weekends with four rounds of matches in the pool stage starting next December when Stade Rochelais (La Rochelle) begin the defence of their title.

The eight highest-ranked clubs from each pool will qualify for the knockout stage, which will consist of a last-16, quarterfinals, semifinals and showpiece final at Dublin’s Aviva Stadium on May 23 next year.

The Stormers will go into next weekend's United Rugby Championship final against the Bulls without top try-scorer Leolin Zas.
Sport
3 weeks ago

The draw for the Champions Cup pools will be carried out on the same lines as last season with the clubs separated into four tiers based on their rankings, and clubs from the same league in the same tier will not be drawn into the same pool.

Twenty clubs will play in next season’s EPCR Challenge Cup with eight representatives from the URC, including the Lions, six from the Top 14, five from the Premiership, plus the Cheetahs, who have accepted an invitation to compete.

Central to the cause: Stormers’ midfielder ‘bleeds blue and white’