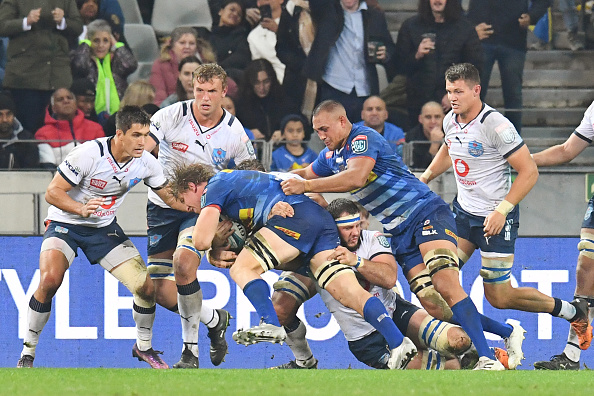 Evan Roos of the Stormers drives forward to score a try during the United Rugby Championship (URC) final against the Bulls at Cape Town Stadium.
Image: RODGER BOSCH/AFPviaGetty Images)

The Stormers held their nerve and composure in the closing minutes to secure a maiden United Rugby Championship (URC) title against the Bulls by winning 18-13 here in Cape Town Stadium on Saturday.

It wasn't just a triumph for the team from the Cape but one that should be celebrated everywhere, save perhaps parts of Gauteng.

The obstacles they overcame to reach the summit of the competition were varied and at the start of the season seemingly insurmountable.

The Stormers overcame their own Everest (in real terms that's more than eight Table Mountains if you're wondering) for the right to take in the rarefied air that comes with this kind of stratospheric success.

The Griquas will host the Pumas in Kimberley on Saturday in a final between two teams that were given little or even no chance at the beginning of ...
Sport
2 weeks ago

Few are destined to breath it.

They had come close before, most notably when history was made in Soweto a dozen years ago.

The symbolism that accompanied that final spawned a feel-good factor that lingered, as it indeed now will in these parts, as John Dobson and his team more than restored pride.

This win will be the source of hope and inspiration long after the pyrotechnics lose their glow over Green Point.

From Mouille Point to Melkbos, Tableview to Tafelsig in length and breadth this is a win that should unite the region's fractious factions.

Dobson, a coach so marvellously in tune with his players and his general surrounds can take huge satisfaction from this win.

'I was sick and tired of talking about 1970,' says coach Pieter Bergh as Griquas reach first Currie Cup final in 52 years

After leading the Griquas to their first Currie Cup final in 52 years, coach Pieter Bergh hopes his current team can match the franchise’s great ...
Sport
2 weeks ago

He has done what White did en route to a World Cup triumph in 2007 by shielding his team from forces eager to rip it apart.

Dobson's rugby nut dad, Paul, would have delighted in this win and what it represents.

Though the Stormers are capable of inflicting damage in wide open spaces, it was the grit they showed at close quarters in the second half that helped get the job done.

In fact, they looked like the team that wanted to put their hands on the trophy, which is a trait you'd usually associate with the Bulls.

The Bulls who held a 7-3 advantage at the break could not deliver the power game that helped propel them to victory in Dublin a week ago.

They were frankly stunted at source by a Stormers team that took a while to warm to the challenge in chilly conditions.

The Springboks have wrapped up the second week of their preparation camp in Pretoria with coach Jacques Nienaber saying the squad has made good ...
Sport
2 weeks ago

The hosts, who did themselves few favours before delivering a storming finish to their semifinal against Ulster a week ago, again dropped off the pace early on. The Bulls marched them backwards as the visiting team seemed to be more responsive to the whistle that signalled kickoff.

Sure enough the visitors secured an early line-out and marched on the Stormers line which left centre Harold Vorster the almost innate task of running straight, hard before wriggling his way over in the opening minutes.

The Stormers in that moment appear afflicted by the magnitude of the occasion.

They looked jittery, apprehensive and not entirely sure of what got them to the final.

Their task was further complicated by a wet surface which made offloads, which they are usually proficient at, a lot more treacherous.

To be fair, it did not help the Bulls either, though their willingness to carry the ball for sustained periods was far more diminished than that of the Stormers.

To compound matters the Stormers kicking game in the first half served to hand over possession to the Bulls which the visitors in turn did not look upon as an opportunity to punish the hosts' errant ways.

Exit penalties helped extricate the hosts from sticky situations and sure enough the Bulls' first half charge ran its course well before halftime.

The second half however was a completely different ball game.

Soon after the break the Stormers came back down the tunnel, with renewed vigour and a clearer sense of purpose.

They took the fight to the Bulls, by going direct but also playing an offload game that coach Dobson predicted they would not abandon in the cut and thrust of knockout rugby.

First Evan Roos got over the try line through sheer sustained pressure from the Stormers before replacement hooker Andre-Hugo Venter somehow got the ball down from the back of a maul to hand the Stormers a five-point lead.

That the Stormers held on, and ultimately won the trophy beggars belief.

Dobson, his coaching staff, the team and the folk that helped stabilise the franchise behind the scenes, can take a bow.

Bulls vice-captain and loose-forward Arno Botha is expecting a physical battle when they meet the Stormers in the United Rugby Championship (URC) ...
Sport
2 weeks ago

It's all systems go for the hugely anticipated and inaugural United Rugby Championship (URC) final between the Stormers and the Bulls at Cape Town ...
Sport
2 weeks ago