Baxter admits juggling Bafana and Supersport has been strenuous 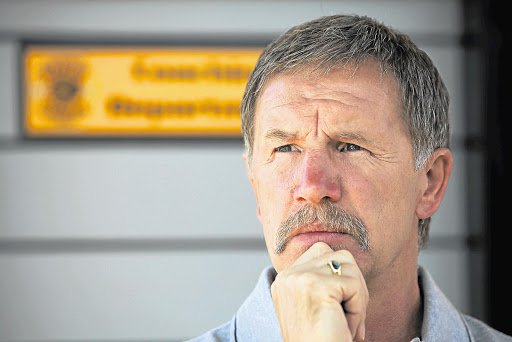 The Briton was surprisingly on the bench for Tuesday's goalless draw against TP Mazembe in the CAF Confederations Cup Group D encounter at the Lucas Moripe Stadium in Atteridgeville.

Saturday's Nedbank Cup final against Orlando Pirates will be Baxter's last SuperSport assignment before looking after Bafana on a full-time basis.

Why Dove Wome does not want to go back to Supersport

Dove Wome would like to make Orlando Pirates his home after struggling to settle down at SuperSport United and Mamelodi Sundowns.
Sport
5 years ago

“It's been the most difficult thing that I've done in my career‚" Baxter said.

"I don't need to look for excuses because the results have been coming but it's been very difficult.

"I like to do things properly and not half and half.

"When I took this on and agreed on the solution that I'd do the home fixtures and finish off with the Cup Final‚ if I went to Nigeria and lost‚ people were going to say I've got my SuperSport hat on.

"If I'd beaten Nigeria and have bad results here‚ people were going to say he's forgotten about SuperSport and he's a Bafana coach now‚” Baxter said.

“I knew I wanted to be certain that I could do the preparations properly and even though the Nigeria game was rushed and vastly inferior from a preparation perspective‚ I thought our performance was excellent and I think that was the same with the SuperSport side.

"I've got one more game that being the cup final but I can't breathe out because there are the COSAFA and the Chan games.

"My commitment to SuperSport will be total‚ right up until the final.”

While his assistant Kaitano Tembo has been manning the fort in the away matches where the side drew 2-2 against Mazembe in Lubumbashi earlier this month alongside the 5-3 win against CF Mounana in Gabon‚ Baxter said it would not have made sense for him to be in the stands for the game.

With group leaders Horoya from Guinea beating Mounana 1-0 in Conakry‚ SuperSport and Mazembe have a mountain to climb with the sides in second and third place on six points.

While he acknowledged his team's improved defensive showing in keeping their first clean sheet of the group stage‚ Baxter said they lost two crucial points.

“When you play against a side like TP Mazembe‚ you do have to say it wasn't bad but if you look at the performance that we gave‚ we deserved the three points and we didn't get them.

"So it's two points that we've let go.

“I've been taking the trainings since I came back from Nigeria and it was going to be silly of me to be on the stands because I'm involved in it and the players deserve it from me to get the last push if I can.

"Kaitano has been with me and he would have sat on the bench.

"If I want to do it‚ I must do it properly even though it's difficult to be switching. It wasn't agreed that I'd be on the bench but that's what transpired.”