Wits return to work to plan for new PSL season 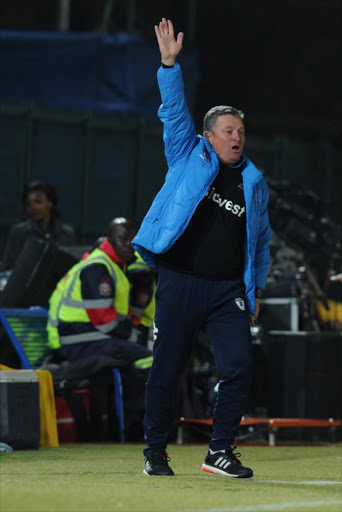 Gavin Hunt will not be tinkering with a winning formula as his Bidvest Wits champions returned to work on Monday at the end of their holidays and ready to take on the new season.

The coach is sticking with the same pre-season programme he has relied on for years‚ officials confirmed‚ beginning with training at the club’s base at Sturrock park on Monday.

It will be followed by a steady diet of training games‚ then a trip down to Stellenbosch and concluded with a now traditional one-day two-match tournament behind closed doors at Bidvest Stadium‚ involving other Premier Soccer League clubs.

The week in Stellenbosch might be one of the foundations for Hunt as he puts his players through a Spartan regime and piles on exercise matches that leave them literally exhausted at the end of their sojourn in the Cape.

But they come out of the trip tougher and fitter and raring to go at the start of the season.

Last year the players at least got to stay at a decent hotel – a change from the past when Hunt had his players in dormitories at the university.

But they still rise before dawn on cold winter’s mornings at 6am in the morning for a run or off to the gym‚ then another session in mid-morning‚ followed by a 3pm match against one of the local clubs‚ including the top flight outfits Ajax Cape Town and Cape Town City.

By the end of the day the players were out on their feet but had to endure the process all over again‚ day-after-day for a week‚ testing not only their physical capacity but also‚ and perhaps more importantly‚ their mental toughness.

Wits will also accept invitation for other one-day tournaments being hosted by municipalities in various provinces.

The Clever Boys are also to make up their minds this week about the future of several players whose contracts are coming to an end.

But the club has confirmed that Dominguez (Elias Pelembe)‚ the 33-year-old Mozambican international has had his contract extended.