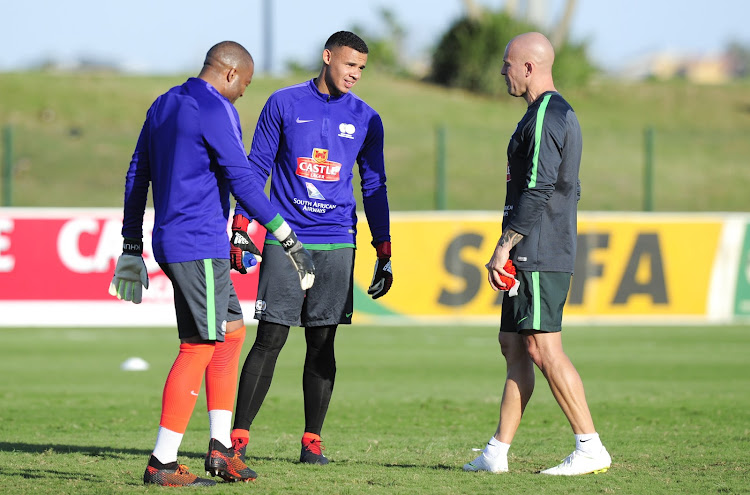 The goalkeepers in the Bafana Bafana squad had some say in Lee Baxter being the choice to replace Andre Arendse as the keeper-coach for the SAs 2019 Africa Cup of Nations (Afcon) qualifier against Libya on Saturday.

Two of the national team’s goalkeepers‚ No.1 Itumeleng Khune of Chiefs and SuperSport United’s Ronwen Williams‚ have worked with Lee Baxter.

Only Bidvest Wits keeper Darren Keet has not.

Williams said the Bafana keepers had their say in the replacement for Arendse‚ who withdrew from the squad because his wife recently had an operation.

“They [the team management] spoke to myself and ‘Itu’ [Khune] because obviously we’ve worked with Lee‚” Williams said at the Bafana training camp in Durban on Tuesday morning at Princess Magogo Stadium in KwaMashu.

“We obviously mentioned him. He’s a very good keeper-coach. He doesn’t just focus on us‚ but on the defence as well. So it’s good for us that he’s here.

“It’s only Darren who hasn't worked with him. It’s good for myself‚ Itu and Darren. We’ll learn a lot from him.”

Williams said he found Lee Baxter to be a highly competent goalkeeping coach when Stuart Baxter and his son paired up at SuperSport in 2016.

“I enjoyed my time with him and I always told him that I would love to work with him again‚” Williams said.

“I will rate him as one of the best who I have worked with. He came in at SuperSport and in a short space of time – we worked together for five months – we went on to win the Nedbank Cup.

“He just changed my mentality. There were small things that he changed in my game.

“The first day when he arrived he had about 20 videos of goals that I had conceded throughout my career. And that just shows how seriously he takes his job.

“I’m proud of him and happy for him being here because he deserves it.”

Libya started with a 5-1 thrashing of Seychelles in Egypt.