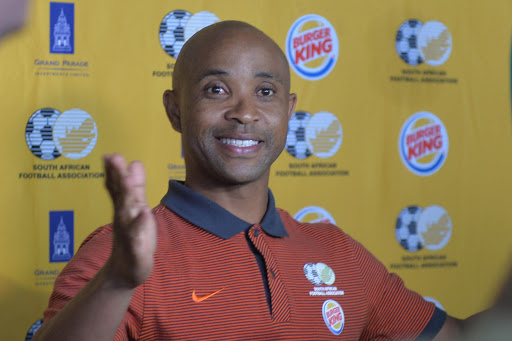 Holders South Africa face the tough prospect of Angola in their 2018 Cosafa Under-20 Championships semi-final in Kitwe‚ Zambia, on Tuesday‚ which coach Thabo Senong says is another chance for his players to learn the rigours of international football.

Amajita have cruised through their three-team pool with a 5-0 win over Mauritius and a 4-0 success against Eswatini to set up their semifinal against the Angolans in a bid to retain the title they won in Kitwe 12 months ago.

Senong is hoping for a tough test for his side though as they build towards the African Under-20 Championships that will be staged in Niger in February‚ where Amajita will have the chance to qualify for the World Cup in this age group later in the year.

"This is football. If they [opponents] give you problems‚ then come with solutions. That's how we develop our players‚” Senong said.

"For us it's a good experience because we keep on learning and improving our team. You can only learn if you are presented with problems.

"We are working with young players and the main priority is to make sure that they make less mistakes. That is what we are trying to teach them‚ because when you make fewer mistakes then you have a chance to win every match.

"We are trying to perfect our game because we know from here every game becomes tougher. Now in the next stage it's do-or-die.”

Senong says that while guiding teams through tournaments‚ be it Cosafa level or on the continental stage‚ the ultimate aim is always to make them better footballers through experience to set them on the path to a successful professional career.

Angola will provide a stern test after they sealed their semifinal place with a 4-1 hammering of a much-changed Zimbabwe on Sunday.

"It's up to our boys to develop and continue learning‚” he says.

“They are young boys‚ but we need to move them forward from being boys and turn them into men so that they can have a chance to play at their PSL clubs‚ which many are not doing at the moment. Maybe some can also be scouted abroad."

He adds that the tournament in Niger is very much front of mind and the work they do in Zambia is vital for that.

"We are also looking ahead to the Afcon in Niger‚ it is very close in February and how we play now will determine how we play there‚ so hence we cannot afford to make a lot of mistakes.”

Should Amajita advance‚ they will play either hosts Zambia or Zimbabwe in the final on Friday‚ and Senong says his side is so comfortable in Kitwe they almost feel as though they are in South Africa.

"Zambia is home‚ if you look at how many times we come here in a year and with the political history as well. This is home‚" he said.

"That's why the boys are so relaxed. It's almost like we are co-hosting with Zambia!”

Amajita breeze past Eswatini to advance to Cosafa Cup semis

Defending champions South Africa eased into semifinals of the Cosafa Under-20 Championships with a comfortable 4-0 victory over Eswatini at the Nkana ...
Sport
3 years ago

South Africa coach Thabo Senong says he is pleased with the start made by his side in their 5-0 mauling of Mauritius in their opening Group B clash ...
Sport
3 years ago

SA Under-20 national team coach Thabo Senong will be without three of the five overseas-based players he called up in his 28-man provisional squad ...
Sport
3 years ago