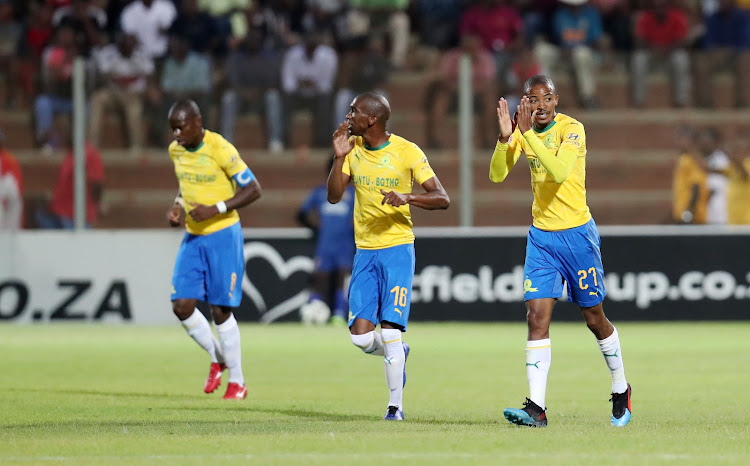 Thapelo Morena of Mamelodi Sundowns celebrates goal with teammates during the Absa Premiership 2018/19 match between Highlands Park and Mamelodi Sundowns at the Makhulong Stadium, Tembisa on the 22 January 2019.
Image: ©Muzi Ntombela/BackpagePix

Mamelodi Sundowns was eliminated from the Nedbank Cup but coach Pitso Mosimane took positives out of the 2-1 loss to Chippa United.

Sundowns must bounce back quickly from the Chippa United defeat in Port Elizabeth at the weekend to be ready for their next Absa Premiership clash against AmaZulu on Tuesday at Loftus which he said is a mist win for them.

Victory for Sundowns over AmaZulu by at least two goals will see them move to the top of the log standings with two games in hand to put immense pressure on other pacesetters in the form of Bidvest Wits and Orlando Pirates.

“We were disappointed we didn’t win‚ we wanted to win but it’s the FA Cup and shocks are possible. This one was not meant for us‚ I think‚” said Mosimane.

“We missed many chances that I began to ask myself whether it would be just one of those days. But if we look at the positives‚ it does relieve some of the possible fixture congestion. We might have more time to rest between games now.”

Mosimane said there would have been little point going through several rounds of the competition and further congest their programme.

“You have to think of all the yellow and red cards and injuries that you pick up along the way. I’m unhappy with the result but not unhappy with the play. I think we played well‚ just we conceded goals at critical stage and from a set piece. I like that we played to win and I thought probably as the game went on‚ that in the last 30 minutes they would be stronger than us because they were a well rested team.

“I thought that our programme would take a toll on us and that Chippa would be stronger‚ but we were stronger at the end. It just shows the mentality of the team – fighting to win and believing they can win. It also shows their minds are right and they are looking after themselves off the pitch. If you don’t look after yourself it shows on the pitch‚ you cannot cheat that‚” the coach said.

Looking ahead of the clash against AmaZulu‚ Mosimane said: It’s a must win for us as we catch up our league fixtures.”