Winless in 12 games, Kaizer Chiefs desperate for a lucky 13 against Pirates 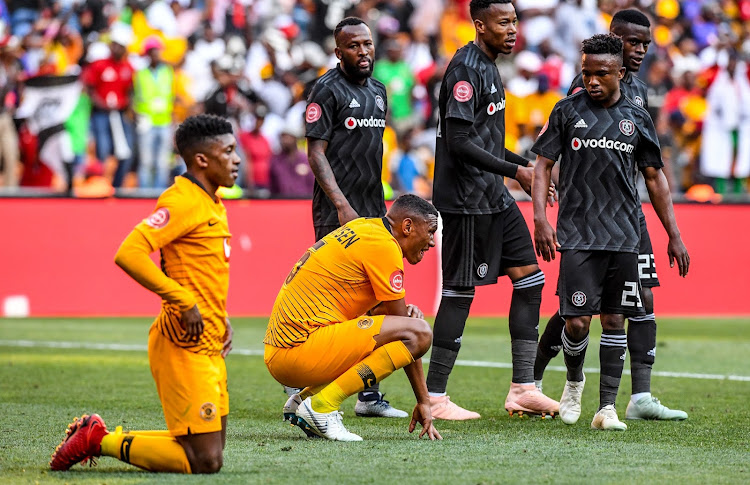 Kaizer Chiefs will hope that their upturn in fortunes and the decline of Orlando Pirates this season will help them to overcome a most unwanted record — the longest winless run in Soweto Derby history.

The teams will clash in the Telkom Knockout quarterfinals at Durban’s Moses Mabhida Stadium on Saturday with Chiefs winless in their past 12 matches against their great rivals, a run dating back almost five years.

It is already a damning statistic for Amakhosi fans, but they will hope to make it lucky 13 with a win, especially given the relative form of the sides this season.

TimesLIVE takes a quick glance at the past 12 Soweto Derby matches that have seen nothing in the win column for the Naturena club:

A dull league clash at FNB Stadium that ended goalless with chances few and far between.

A strong second-half performance from Pirates saw them race clear in this league clash as Ayanda Gcaba and Thamsanqa Gabuza followed up an opener from Issa Sarr. Erick Mathoho had equalised for Chiefs before half time.

A Telkom Knockout semifinal that finished goalless, though this one had a bit more life to it. When it went to extra time both teams settled for spot kicks and though Chiefs triumphed 6-5, this result goes into the history books as a draw. Chiefs lost the final 3-1 to Sundowns.

Willard Katsande put Chiefs ahead with a rare Soweto Derby goal, but Gabuza equalised in the second period of this league clash.

The Soweto giants were paired together in the last-32 of the Nedbank Cup and two goals in the final 13 minutes from Pirates striker Tendai Ndoro settled this contest. Pirates were good value for their win.

This match was played in front of a not-quite capacity FNB Stadium as the Chiefs faithful in particular grew wary of their side’s underachievement. Not much to write home about in this stale draw.

Chiefs started the brighter in this game and had a deserved lead through Joseph Malongoane, but an own goal from Tsepo Masilela meant Pirates picked up a point.

Both teams cancelled each other out in a contest that perhaps deserved a goal, as they took the game to each other in this league game at the start of the 2017-18 season.

A brace from Luvuyo Memela sealed the points for Pirates after Thembinkosi Lorch had put them ahead. Leonardo Castro equalised for Chiefs, but Pirates were much too strong on the day.

Chiefs led early through Khama Billiat, but Pirates were in front before half time as two goals in three minutes turned the game on its head. Innocent Maela equalised before Vincent Pule got what proved the winner.

Lorch had Pirates ahead early on in this Telkom Knockout semifinal but Castro equalised for Chiefs. It looked as though the game would head for extra time before Justin Shonga pounced to score the winner.

The last meeting between the sides was a league clash in February as Daniel Cardoso put Chiefs in front from the penalty spot. Lorch equalised with 10 minutes to go though, to ensure the points were shared.

Leonardo Castro says he did not touch the ball for Samir Nurkovic’s much-contested opening goal against Mamelodi Sundowns in Kaizer Chiefs’ 2-0 Absa ...
Sport
2 years ago

Chiefs midfield strongman Willard Katsande: So why would I sit and sulk?

Willard Katsande has no problems taking a back seat at Kaizer Chiefs‚ if that is what is required for the team to progress.
Sport
2 years ago

Orlando Pirates coach Rulani Mokwena says has respect for Kaizer Chiefs counterpart Ernst Middendorp and is impressed with the structure the German ...
Sport
2 years ago