Balanced starting line-ups from Chiefs and Pirates for Durban derby 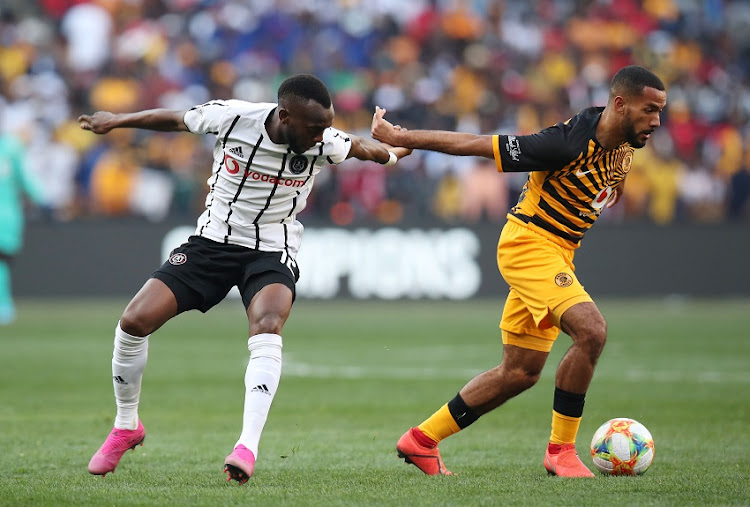 Reeve Frosler of Kaizer Chiefs challenged by Justin Shonga of Orlando Pirates during the 2019 Carling Black Label Cup match between Kaizer Chiefs and orlando Pirates at the FNB Stadium, Johannesburg on the 27 July 201.
Image: ©Muzi Ntombela/BackpagePix

Middendorp kept faith with goalkeeper Daniel Akpeyi with captain Eric Mathoho in the heart of the defence and Willard Kattsande‚ George Maluleka‚ Khama Billiat in the midfield while Samir Nurkovic and Leornardo Castro will lead the line.

Mokwena picked Wayne Sandilands between the posts‚ with Happy Jele marshaling the defence‚ in the midfield Ben Motswari will be the holding midfielder with Fortune Makaringe.

On the attack‚ Vincent Pule‚ Thembinkosi Lorch‚ Kabelo Dlamini and Tshegofatsho Mabasa will be tasked with finding holes in the Chiefs defence.

Before the squads were announced‚ Chiefs and Pirates arrived at the stadium in high spirits.

With about an hour before kickoff‚ fans were beginning to fill the iconic 2010 World Cup stadium which is expected to be packed to capacity since the tickets were sold out earlier in the week.

Chiefs are hoping to change their fortunes as they are on a disappointing 12-match winless run against their bitter rivals in open play having last beat them in a competitive match in 2014.

Chiefs did beat Pirates in the semifinals of the Telkom Knockout in 2015 but that match was decided on penalties‚ where Chiefs prevailed 6-5 after they were deadlocked 0-0 at in regulation time.

During the 12-match winless period for Chiefs‚ Pirates have recorded five wins while the other seven encounters ended in draws.