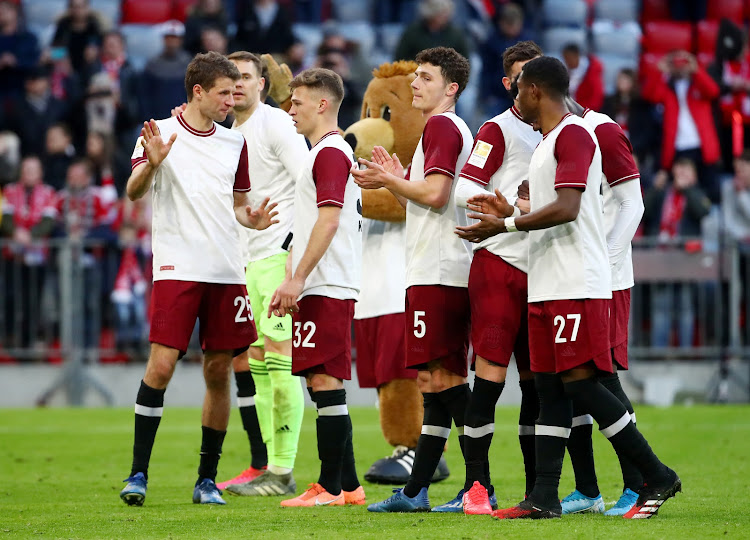 Bayern Munich players have agreed to take pay cuts due to the financial strain felt by the club as a result of the coronavirus outbreak.
Image: REUTERS/Michael Dalder

German clubs were forced to extend the suspension of the Bundesliga to at least April 30 but have put in motion ideas which could prove to be the recipe for others to follow‚ including the South African Premier Soccer League (PSL).

The 36 clubs of the top two German divisions met on Tuesday by video conference and had little option but to extend their current suspension until the end of the month as the coronavirus pandemic is still expected to peak.

But they did reiterate their hopes of finishing the season by June 30‚ unlike other leagues who are making plans to extend their campaigns past July.

The Germans have established a medical task force “to draw up a concept for the medically justifiable resumption of match operations and training”.

Their initial plans include a procedure for the strict and independent testing of players and other staff members‚ including immediately prior to matchdays.

“In addition‚ organisational measures for preventing transmission at stadiums (hygiene‚ disinfection‚ distancing etc.) and specific processes for organising matches and training will be defined in close cooperation with external experts and authorities and set out in the form of standardised guidelines‚” the Bundesliga announced afterwards.

In essence‚ once they have found a medically sound and safe way to accommodate clubs returning to training‚ and matches played behind closed doors‚ they can then proceed to finish the season.

Some club executives would even be willing to organise a tournament that would last 16 days‚ with matches every two days for clubs and several games each day‚ in order to complete the 82 remaining league matches‚ including the semi-finals and the final of the German Cup‚ by June 30.

But it may not be necessary if they move quickly and can persuade authorities to allow games to be played in empty stadiums.

In that case‚ there would be a host of rules.

In order to keep the numbers at stadiums down to less than 100‚ the German league is also drafting a plan that will limit each club to 35 representatives (including the players and coaches)‚ the refereeing staff and some television technicians‚ but games will be covered with fewer cameras.

All the other employees of the clubs concerned (in particular the communication services) must stay at home.

Also for TV‚ the commentators would have to work off site at the headquarters of the broadcasters and even the traditional pre-match and post-match interviews would be done by remote link.

Other measures would be to ban teams taking post-match showers at the stadium‚ and camping at hotels before and after games to limit further exposure to the deadly virus.