SA sailors look on the bright side of Olympic postponement 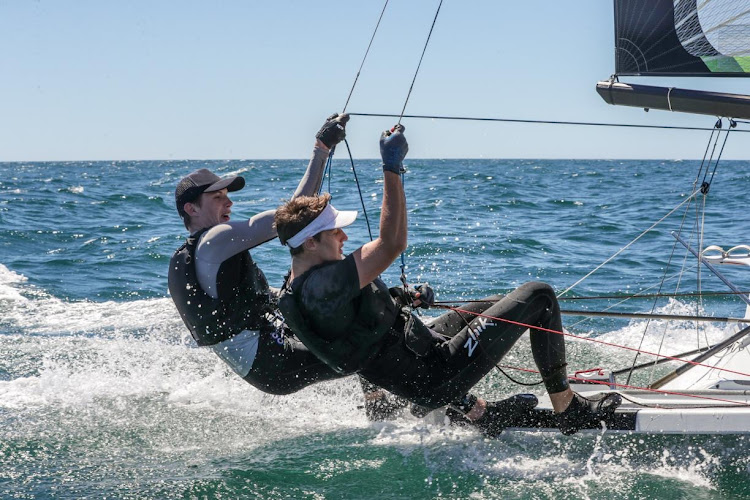 Sailors Benji Daniel and Alex Burger are hoping to qualify for the postponed 2020 Olympics in Tokyo.
Image: Liesl King

With the Olympic Games now officially postponed until 2021 because of the Covid-19 pandemic‚ two of South Africa’s young sailing stars are looking on the bright side.

The postponement gives young Benji Daniel (19) and Alex Burger (23) one more year to gain valuable experience in the 49er class‚ in which they’re hoping to qualify for their first Olympics in Tokyo.

Burger explained: “Our campaign was initially an 18-month project‚ therefore adding a year on does change it significantly.

“Postponing by a year does indeed give us more time to prepare and increase our abilities. However‚ it was not initially budgeted for to have an additional year of full-time campaigning on the circuit.

“We are currently looking at various avenues and possibilities that enable us to keep the momentum we have built over the last year.”

“We were very disappointed initially‚ as we had been working with one goal in mind for the last two years.

“To then have the goalposts shifted by a year throws one off quite hard. In hindsight it is obviously the right decision by the IOC as health should take priority over everything.

“Hopefully our situation will not be negatively affected and we can continue our campaign when this is all over.”

While the new dates for the Games have been announced as 23 July to 8 August‚ there is still uncertainty surrounding the qualification process with all sporting events having been put on hold around the world.

“Unfortunately we have very little information regarding what we need to do to qualify for the Games next year‚” explained Daniel. “World Sailing and the IOC are yet to release the qualification events‚ so until then we have to continue physical training and preparations at home until we know what our schedule looks like for the next 18 months.

“We are also still waiting for the 49er class association and World Sailing to release a schedule for the rest of the year. There is talk of the European season starting off in September again. However‚ we will not make any plans until that has been confirmed.”

As for what they’re up to in the meantime‚ as the country endures a 21-day lockdown period‚ Daniel said: “We are both just trying to eat well‚ sleep well and keep as physically active as possible with the help of small home-gym setups in our houses.

“We have just come off a long stint in Australia and the UAE‚ so it is not a bad time for us to be laying low and spending some time at home.”