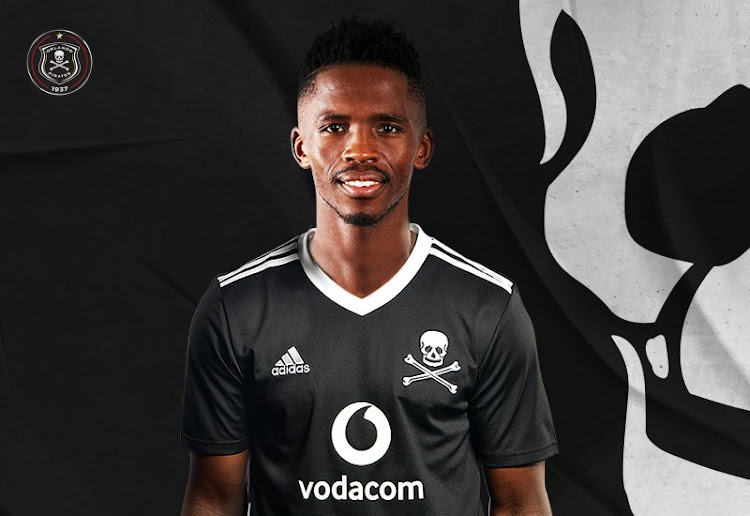 Thabang Monare may make his Orlando Pirates debut in Saturday’s Soweto derby at the Orlando Stadium in the first leg of the MTN8 semifinal against the Buccaneers’ fierce rivals Kaizer Chiefs.

Pirates coach Josef Zinnbauer seemed to warm to the suggestion of introducing the former Bidvest Wits midfielder into his line-up. As his team continues to struggle to create and finish scoring opportunities, new signing Monare might provide some answers for Zinnbauer.

“Ja, I hope,” was Zinnbauer’s response when he was asked about Monare’s possibilities to be in Bucs' line-up for the first time since he joined the team in the short break between last season and the current campaign.

“We might give him some minutes but you have to understand that when we need goals then it’s better to bring the offensive players in.

“I hope [he is ready] because today [Thursday] we had two training sessions with him and he had a very good performance. But as I said before, his conditioning at the moment is for 45 minutes.

“Maybe he’s the option for a starting line-up or he comes in later… I hope so. We know the qualities in Monare and I hope we can use it.”

The Bucs coach has not used the same starting line-up in the past three matches they have played so far in 2020-21, with seven new players – including Ghana's No.1 goalkeeper Richard Ofori, Bafana Bafana skipper Thulani Hlatshwayo and Zimbabwean striker Terrence Dzvukamanja – being introduced into the team.

Monare faces a tough competition earning a spot in Bucs' central midfield where Zinnbauer has not tampered much with Ben Motshwari and Fortune Makaringe, even the though the duo have not been providing enough clear-cut chances, of late, for the strikers.

“This game is about the conditioning and that’s what we’re thinking about now. The players need the minutes,” said the Bucs coach on his players’ fitness and why he hasn’t settled on a line-up.

“And also we have a big squad with good quality. I’ve worked with the players and they now know exactly what we want.”

Pirates lost both league matches against Chiefs last season and they were also on the losing side against Amakhosi in the Telkom Knockout quarterfinals, which means Zinnbauer is under pressure to deliver the results.

Both these Soweto giants have been punching below their weight in recent years with a combined 11-year period in which they’ve starved their supporters of any piece of silverware.

Cup holders SuperSport United face Bloemfontein Celtic at the Lucas Moripe Stadium on Sunday in the other semi-final.

The second leg with will played next weekend with SuperSport/Celtic game on November 7 while Chiefs host Pirates on November 8, a day before the start of the 10-day long Fifa break.

Orlando Pirates coach Josef Zinnbauer says many in his impressive list of new signings for the 2020-21 season need to be brought to speed in ...
Sport
1 year ago

Orlando Pirates coach Josef Zinnbauer allowed himself to express his frustration that his team could not apply the tactics in the first half that he ...
Sport
1 year ago