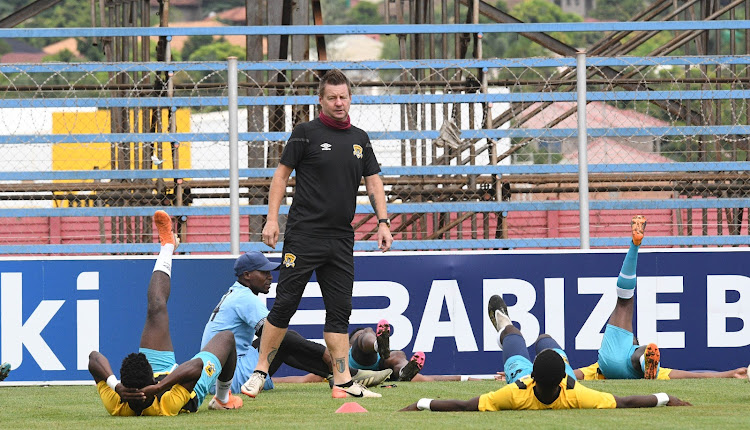 Dylan Kerr resigned from his job as head coach of Black Leopards over a fallout he had with assistant-coach Lehlohonolo Seema‚ a source has alleged.

A source‚ who did not want to be named‚ told TimesLIVE that Kerr and Seema had disagreed over various tactical issues in the club’s last few matches. Kerr at some stage angrily reacted‚ and used the “F” word against Seema‚ and was due to face a disciplinary hearing but resigned instead.

Black Leopards spokesperson Berry Ramunenyiwa said he could not confirm or deny that the fallout was the reason for Kerr’s departure as the club have an agreement with the coach that neither party will reveal the details of his reasons for leaving.

“That is why we have said in our media statements there have been discussions we have been having with him [Kerr] on certain issues‚” Ramunenyiwa said on Tuesday.

Ramunenyiwa said Leopards’ decision to not speak on the matter comes even as they have received criticism for parting ways with a second coach already in 2020-21‚ and not being able to fully explain the circumstances of the second departure.

“In our humble way‚ we are being chastised by people out there for the lack of people understanding what happened or why we let him go‚” the Leopards official said.

“But we are not going to comment further than that in the interest of the agreement that we have with him. If there’s any other information that comes out from anywhere else‚ we will not be able to respond to that.

TS Galaxy are expected to announce Owen da Gama‚ the former coach of the now defunct Highlands Park‚ as their new head coach on Monday‚ TimesLIVE has ...
Sport
1 year ago

“But if he comes out and says‚ ‘This‚ this and that’‚ it’s a different issue. ... We have an agreement and are an honourable team.”

Kerr said he also could not comment on the details of his departure. Kerr’s agent‚ Paul Mitchell‚ could not be reached for comment.

Kerr had become the club’s second coach of 2020-21. Belgian Patrick Aussems‚ appointed in the off-season‚ was fired after losing his first three matches.

In nine games Kerr won twice‚ lost four and drew three. The coach has bounced around Limpopo clubs since arriving in the PSL from Kenya’s Gor Mahia in November 2018.

He coached Leopards for seven months in the second half of the 2018-19 season to 13th place‚ leaving in May 2019 because his mother was seriously ill in the UK.

Kerr was fired by Baroka FC in November — after guiding them to 14th place and survival on the final day of 2019-20 — having been suspended in early October after expressing anger at the club’s management. Days later he rejoined Leopards.

Seema was appointed as Kerr’s assistant at Leopards in late December‚ after the coach had started with one win from five matches. Seema said in an audio supplied by Lidoda Duvha on the PSL media WhatsApp group on Tuesday that he wished Kerr well.

Dylan Kerr believes that his struggling Black Leopards charges can be untouchable if they stick to instructions and play the way they did in the 2-0 ...
Sport
1 year ago

“I would like to thank Black Leopards for bringing me to come and help the team. And it was very unfortunate that the coach had to go‚” the ex-Bloemfontein Celtic and Chippa coach said.

“I think we worked will with him and I wish him all the best in future endeavours.

“Ja‚ it’s a tough ask for us ... But we are up for the challenge. Coach Morgan and coach Banda will help me there‚ and I have also asked coach [Mongezi] Bobe to come‚ because the MDC is closed now‚ and share ideas.”

In Kerr’s last three games‚ since Leopards beat Orlando Pirates 2-0 at Thohoyandou Stadium on January 17, they had lost two games by convincing margins at home‚ 2-0 to Cape Town City and 3-0 against Chippa United on Saturday.

The first assignment for Seema and his fellow technical staff is a tough one against log leaders Mamelodi Sundowns at Thohoyandou Stadium on Wednesday.

The new owner of Tshakhuma Tsha Madzivhandila FC (TTM) purchased the crisis-riddled club for around R40m and he says he will unveil the ambitious ...
Sport
1 year ago

Kaizer Chiefs goalkeeper Itumeleng Khune's absence from the starting lineup has raised eyebrows among the club’s fans but coach Gavin Hunt says his ...
Sport
1 year ago

Mamelodi Sundowns coach Manqoba Mngqithi has urged the club's fans to be patient and not to reach for the panic button just yet as the champions ...
Sport
1 year ago