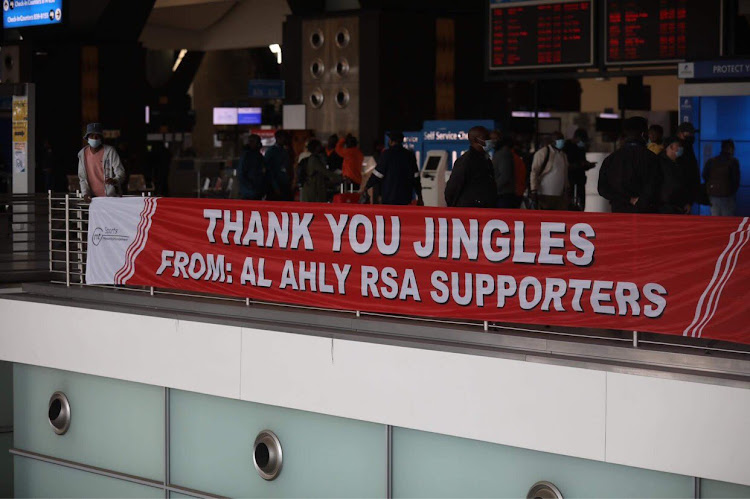 Pitso Mosimane had a warm welcome from the Al Ahly RSA Supporters at the airport.
Image: Al Ahly SC/Twitter

Mamelodi Sundowns will begin dialogue with Egyptian powerhouses Al Ahly “either on Sunday or Monday” in a bid to ease the tension after a section of the Pretoria club's supporters hurled insults at former coach Pitso Mosimane as his team bus was making its way into Lucas Moripe Stadium on Saturday afternoon.

The Brazilians hosted Al Ahly in a tension-riddled Caf Champions League second leg quarterfinal match on Saturday and the already simmering atmosphere was inflamed further when supporters clad in Sundowns colours tried to block the visitors' bus outside the stadium.

The incensed supporters proceeded to hurl insults at their former coach and also brandished placards with similar profanities‚ to the dismay of the visitors and Mosimane.

Pitso Mosimane says “they insulted me & my mother, I know who did this & who instigated them. Even before I came to SA people told me about what was planned against me”. He must reveal their names & they must be dealt with. Why is Sundowns silent though? pic.twitter.com/7J2okZbr64

Sundowns are yet to publicly respond to the incident but insiders at the club told TimesLIVE on Sunday that the Chloorkop-based side would reach out to the Egyptians and denounce the actions of a section of their supporters.

“The club will begin communication with Al Ahly either [on Sunday] or Monday and denounce the actions of those supporters‚” the insider said.

“It was not just about coach Pitso‚ but also about those supporters blocking the Al Ahly team bus in a threatening manner.

“We will engage the club [Al Ahly] because this could also create further problems going forward.”

Caf head of operations Luxolo September said he was in Cameroon inspecting facilities ahead of next year's Africa Cup of Nations‚ and would not be able to comment on the matter.

“At the moment we are in Cameroon for Afcon inspections. I cannot say anything on this‚” he said on Sunday.

The insider said they hope to resolve the issues with Al Ahly speedily as Sundowns might face the Egyptians in continental club competition in the next edition of the Champions League‚ which would mean having to travel to Cairo and then contending with a hostile reception.

It will be interesting to see how Confederation of African Football president Patrice Motsepe responds as the matter involves his club.

Motsepe handed over control of Sundowns to his oldest son‚ Tlhopie‚ when he won the Caf presidential elections on March 12.

He said at the time the title of president of Sundowns would be “retired” for the duration of his Caf presidency.

His wife‚ Precious Moloi-Motsepe‚ and other sons‚ Kgosi and Kabelo‚ have a role to play supporting Thlopie as head of Sundowns.

It is unclear just which club out of Sekhukhune United and Royal AM will be presented a trophy for winning the GladAfrica Championship, or whether ...
Sport
1 year ago

Fans deserve their seat at the top table of football

It was a laugh a minute when Kaizer Chiefs fans said they were going to march against what they perceived to be a complete disregard of their ...
Sport
1 year ago

The National Soccer League's (NSL's) executive committee (exco) that met on Thursday discussed the potential ramifications and implications of an ...
Sport
1 year ago

The PSL has criticised the arbitration decision that saw Sekhukhune United awarded three points this week‚ which has propelled them into a favourable ...
Sport
1 year ago

The EFF have come out in support of Pitso Mosimane after the former Mamelodi Sundowns coach was verbally abused by the club’s supporters in ...
Sport
1 year ago

Kaizer Chiefs continued with their unbelievable journey in the Caf Champions League when they qualified for the semi-finals of Africa’s prestigious ...
Sport
1 year ago