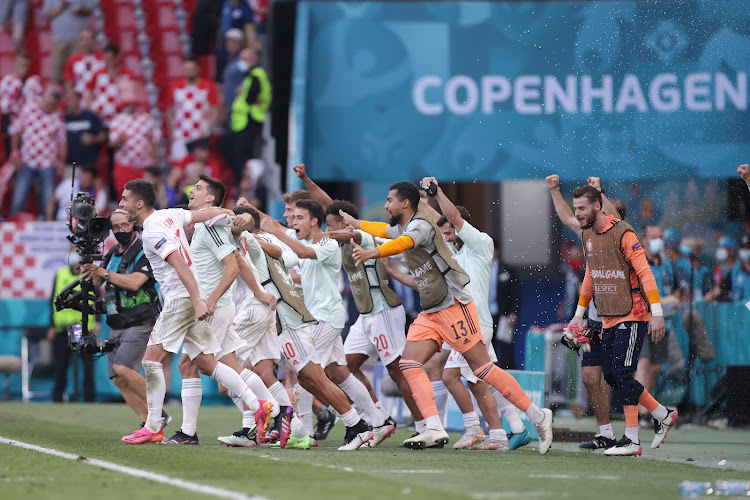 Spain coach Luis Enrique hailed his players' character as the three-times European champions recovered from a nightmare start then let slip a two-goal lead before finally beating Croatia 5-3 in extra time to reach the Euro 2020 quarter-finals.

"It was a very intense game today that really had everything. Everyone saw our true team spirit today," Luis Enrique told a news conference.

"When the word ego disappears and the word team appears, of course it's fantastic to be part of a group like that."

Spain had taken a 3-1 lead after an incredible error from keeper Unai Simon saw them fall behind.

"They didn't really create any chance, yet we conceded a goal.

"So when that happened, it felt very unfair and of course it can lead to a bit of shock for a few minutes," Luis Enrique said.

Croatia staged an astonishing comeback with goals in the 85th minute and in added time, but Spain went on to score two goals in extra time.

"I am pleased we got a second chance. That doesn't usually happen," the coach added.

"It went crazy really after the 80th minute, when we could have scored a fourth goal and put it to bed. Those final 10 minutes are something we have to learn from.

"We don't have that much international experience within the squad, and perhaps those kinds of mistakes are inevitable."

Luis Enrique was moved by the fans' appreciation of the pulsating game in Copenhagen.

"What really struck me was the final five minutes of extra time, when the fans stood up and applauded and paid tribute to the great effort and commitment of all of the players who had competed," he said.

"That was a lovely gesture from the fans, it was about recognising the spectacle that both teams put on today. The headline tonight is: enjoy football."

Switzerland's extraordinary comeback to eliminate world champions France from the European Championship on Monday drew superlatives from both coach ...
Sport
1 year ago

Striker Kylian Mbappe will bounce back from missing the decisive penalty in France's shootout loss to Switzerland on Monday that saw the world ...
Sport
1 year ago

Chippa United coach Lehlohonolo Seema has praised the professionalism his players displayed mounting a hard-fought battle to save their DStv ...
Sport
1 year ago

Al Ahly coach Pitso Mosimane has warned those associated with the Egyptian giants that Kaizer Chiefs can hurt any opponent who take them lightly.
Sport
1 year ago

The debilitating blow of Kaizer Chiefs’ final-day choke of the Premiership title in 2020-21 finally also had the rebound effect of inspiring them to ...
Sport
1 year ago