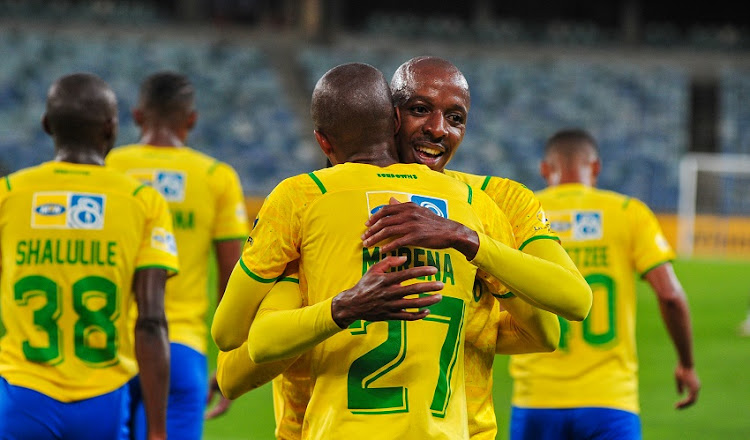 Mamelodi Sundowns may have won the MTN8 final at the weekend but co-coach Rulani Mokwena believes their game was hampered after Thabiso Kutumela's forced substitution against Cape Town City at Moses Mabhida Stadium.

Sundowns held their nerve to win the trophy 3-2 on penalties after the two sides had played to a 1-1 draw in 120 minutes of football.

Mokwena said Kutumela is not back to peak condition yet after returning from Bafana Bafana's recent back-to-back 2022 World Cup qualifiers against Ethiopia. The Sundowns coach said last month Kutumela returned from national duty “jaded” and “overloaded” and has struggled with his performances at Sundowns.

“Kutu is still struggling a little bit and it's not easy. He's not in the best of conditions, particularly having returned from national duty,” Mokwena said.

“He's got a slight strain. I will call it a muscular problem, even though we have not really diagnosed it. It's on the lower part of the foot, which is where he had his operation.”

The Brazilians' victory came largely through the contribution of their skipper and goalkeeper Denis Onyango, who saved five spot kicks after Sundowns had struggled to control the proceedings without Kutumela. The Bafana player did not return in the second half after sustaining a muscle injury.

The attacking midfielder was vital in helping Sundowns press City high up the field and he provided the assist to Thapelo Morena to give the Brazilians the lead in the 24th minute.

Fagrie Lakay cancelled out Morena's goal with 15 minutes remaining to take the match to extra-time and penalties. Mokwena, delighted to have seen his side win this trophy after 14 years, admitted afterwards that it was hard for them to pin City in their own half.

Kutumela was replaced by striker Kermit Erasmus at the break.

“We had worked on the schemes, on our high press with Cape Town City particularly, because they use a player like (Thato) Mokeke a little bit on the other side of the pitch.

“I had spoken about the role that he (Mokeke) plays. It's not easy to deal with the Cape Town City build-up diamond, but Kutumela has a little bit of experience with managing that sort of structure.

“We needed his intelligence and intensity and his ability to not just press but to also help with the second movement after the press. [There aren't] a lot of players in SA [who] have this ability to have one action, which is aggressive in the defensive part, and then continue to participate in the progression of the attack after the ball has been regained.

“We lost that dynamism, we lost the intensity and we lost the aggression that he gives us.

“We struggled to contain the movement of Mokeke and (Thabo) Nodada.”

Mokwena was, however, hopeful that it won't be long before Kutumela returns after he was seen celebrating with his teammates after their hard-fought triumph on Saturday.

“It [the injury] does not look too severe. I saw Kutumela dancing in the changing room and I asked him and I said, 'I thought you were injured'.

“So it was a good sign to see him dancing and doing that celebration.”

Mamelodi Sundowns co-head coach Rulani Mokwena tried all week to tell everyone how dangerous Eric Tinkler’s Cape Town City will be against them in ...
Sport
9 months ago

Mamelodi Sundowns co-head coach Rulani Mokwena has provided their injury update ahead of the MTN8 final against Cape Town City at the Moses Mabhida ...
Sport
9 months ago

Mamelodi Sundowns continued their staggering dominance of the domestic scene when they finally laid their hands on the MTN8 in its current guise with ...
Sport
9 months ago