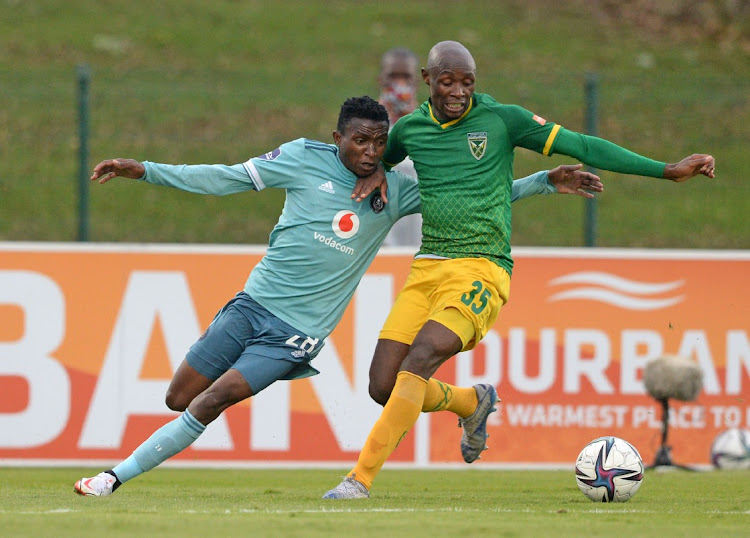 Orlando Pirates’ co-coach Mandla Ncikazi came up with an extraordinary description of his side's struggles in the DStv Premiership this season after yet another disappointing goalless draw away to his former team Lamontville Golden Arrows at the weekend, saying “the ball refuses to touch the net”.

The draw against Arrows at the Princess Magogo Stadium on Saturday was the Bucs’ sixth in 11 outings and left Ncikazi’s team, which has won only three matches this season, in the seventh spot and 11 points behind leaders Mamelodi Sundowns, who still have a game in hand.

“I’m not disappointed with the performance and effort from the players,” he said.

“I’m disappointed with the result and the fact that the ball refuses to touch the net.”

As has been the case for Bucs since this season started, they created enough chances to win Saturday’s match, especially in the first half when Fortune Makaringe, Linda Mntambo and Deon Hotto all came close to breaking the deadlock.

But in the end Pirates got a point, which Ncikazi said felt like they dropped two.

“Based on the number of chances we created, I’m disappointed (with the result),” said Ncikazi.

“It’s two points dropped and I don’t think Pirates deserved a point. I think we deserved three. But in a game of football if you’re not putting the ball in the net you’re not going to win matches.

“If it takes longer for you the score, the opponents gain confidence. There are a number of chances we created. Just take one or two and the game will change.

“It’s a process we have to work on and I hope we still encourage the players. It is our job as coaches to work on these situations.”

Ncikazi joked that between himself and Fadlu Davids, one might suffer a heart attack one day because of what they're experiencing on the Bucs' bench.

“One of us (the coaches) is going to have a heart attack very soon,” said Ncikazi.

“It’s frustrating, but as coaches we must see the light where everybody sees darkness.

“We have to there for the players and we have to find solutions to try solve this problem. I think we have the capacity to solve it and we must solve it soon.

“The next match is here. Stellenbosch is not an easy match away (on Wednesday), but we have to put the ball in the net.

“Even if it means the score is 4-3,  as long as Pirates have scored more than the opponents that’s important.”

Ncikazi said it was vital for Bucs to start collecting maximum points, especially with the fixtures coming thick and fast going to the festive season.

“It’s crazy and I hope the fixtures are like this for everybody. I’m happy some players are creeping in from injuries.

“We need a bigger pool of players and to give confidence to the current team. We also need unity in the team so t we can face this schedule, which is tight. But I’m confident Pirates will be able to come out of this.”

Poor Orlando Pirates fail to take their chances against Arrows

Orlando Pirates continued with their indifferent league form when they played a 0-0 draw away to Lamontville Golden Arrows clash at the Princess ...
Sport
5 months ago

Orlando Pirates continued with their indifferent DStv Premiership form playing to a 0-0 draw away against Lamontville Golden Arrows at Princess ...
Sport
5 months ago

A strong, successful Bafana Bafana squad needs a supply line of quality players from Chiefs and Pirates
Sport
6 months ago