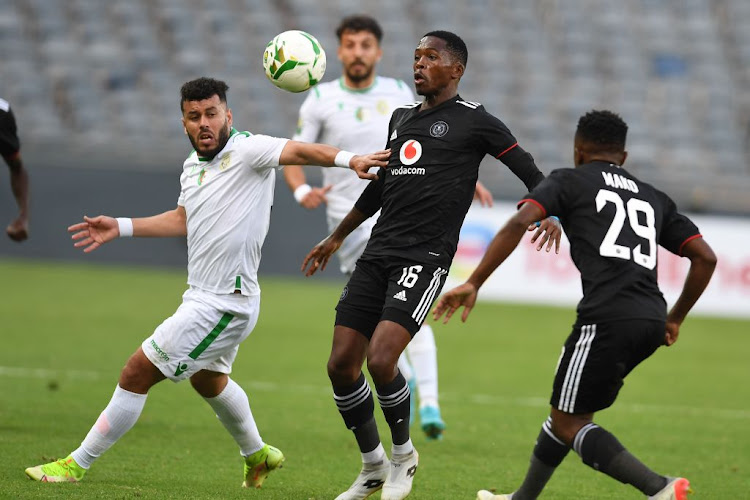 Mohamed Hammia of JS Saoura and Thabang Monare of Orlando Pirates during the Caf Confederation Cup match between the two sides at Orlando Stadium on February 13, 2022 in Johannesburg, SA.
Image: Lefty Shivambu/Gallo Images

Skipper Happy Jele scored after only two minutes and Bandile Shandu added one more in the second half, as Orlando Pirates began their Caf Confederation Cup campaign on a winning note with a 2-0 triumph over dangerous Algerian opponent JS Saoura on Sunday night.

Jele continued his knack for finding goals from set-pieces – he now has 19 in his Pirates career – as he reacted quickest to a rebound in the area and slot home from close range.

Thembinkosi Lorch’s free kick was met at the back post by Goodman Mosele, who evaded both the visiting defence and offside flag to get a touch to the ball at full stretch.

It forced a save out of goalkeeper Zakaria Saidi, but he could only parry the ball and the 35-year-old Jele was first to react and net the ball.

Pirates had already escaped inside the opening minute at the Orlando Stadium when a run from Mohamed Hammia down the flank produced a cross that Abdeldjaid Saad hit goalwards but without too much force and, fortunately for the hosts, went straight at ‘keeper Siyabonga Mpontshane.

He also made a good save midway through the half from JS Saoura’s dangerman Belaid Hamidi, who hit a volleyed effort on target but saw the Bucs’ goalie push it around the corner.

Pirates were best when they put pace into their build-ups, which were ponderous at times with too many touches, but when they played with one touch, getting the ball quickly up field, they looked dangerous.

The second goal came in the 66th minute after a poor clearance from goalkeeper Saidi, picked up by the industrious Mosele, who fed Lorch. He, in turn, found Deon Hotto out wide and it was the square pass from the Namibian that Shandu got to for his third goal in Pirates’ colours this season.

Pirates will be pleased with their start to a competition where the open field means they are one of the favourites to lift the title.

Pirates had reached the final of the competition before, in 2015, and last season were knocked out at the quarter-final stage by eventual winners Raja Casablanca of Morocco.