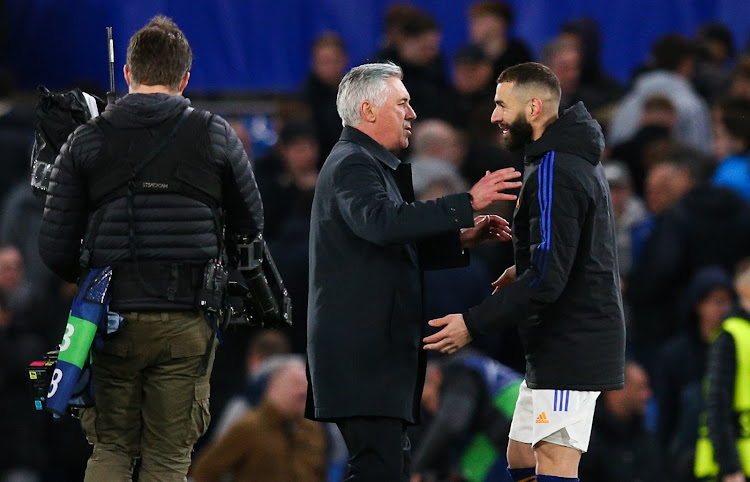 Real Madrid coach Carlo Ancelotti compared his striker Karim Benzema to a fine wine that improves with age after the 34-year-old netted a hat-trick against Chelsea on Wednesday, putting the Spaniards in control of their Champions League quarterfinal.

"He just gets better and better, like wine," Ancelotti said when asked about Benzema's performance against the reigning European champions.

Benzema hit Chelsea with two fine headed goals in the 21st and 24th minutes before capitalising from an error by goalkeeper Edouard Mendy to claim his hat-trick early in the second half.

"He is really complete, not just as a striker but as a player. Benzema scores a lot of goals and this is really important but he also helps the team a lot in possession," Ancelotti said. "We are really happy and lucky to have him."

The Italian, who steered Chelsea to a league and cup double in 2009-10 as coach at Stamford Bridge, said Wednesday's performance by his side had been "amazing" but stressed the tie was far from over.

"I still think it will be tough for us in the next game against them. For this we are focused," he said.

Chelsea coach Thomas Tuchel said the reigning European champions were facing an exit unless they can regain their focus.

Liverpool manager Juergen Klopp heaped praise on Benfica keeper Odysseas Vlachodimos for denying the English side a bigger victory after their 3-1 ...
Sport
2 months ago

Hard on the heels of a 4-1 thrashing by Premier League new boys Brentford on Saturday, also at Stamford Bridge, Tuchel said he was at a loss to explain his team's sudden slump.

"We have to find our level back and I don't know where it is, but ... the first half is a repetition of the second half against Brentford, in a quarterfinal against Real Madrid," Tuchel said.

"[We were] so far off our level in absolutely everything what the game demands," he said. "You cannot expect a result from this kind of performance."

Tuchel said Chelsea would lose against Southampton on Saturday if they played as they did in the first half against Real Madrid. He said it was alarming to have conceded seven goals in two games, a far cry from the defensive solidity Tuchel introduced on his arrival at the club in January last year.

He said Romelu Lukaku, Chelsea's record signing who only came on as a second-half substitute, had missed a "very important" chance to narrow the deficit with a header when the score was 3-1, but the problems were not just about one or two individuals.

Manchester City manager Pep Guardiola called on his players to control their emotions in their Champions League quarterfinal return leg at Atletico ...
Sport
2 months ago

Mamelodi Sundowns’ new Danish sporting director Flemming Berg says his role is to co-ordinate all the clubs’ sporting departments, and have them ...
Sport
3 months ago

‘It was so intriguing’: Sundowns turn to Danish ice Berg for expertise

Brazilians’ new sporting director explains why, despite so much going right for Denmark, he chose to come to SA
Sport
3 months ago

The Ricketts family have outlined a list of commitments if they win the bid to buy Chelsea, saying they would never allow the Premier League club to ...
Sport
3 months ago