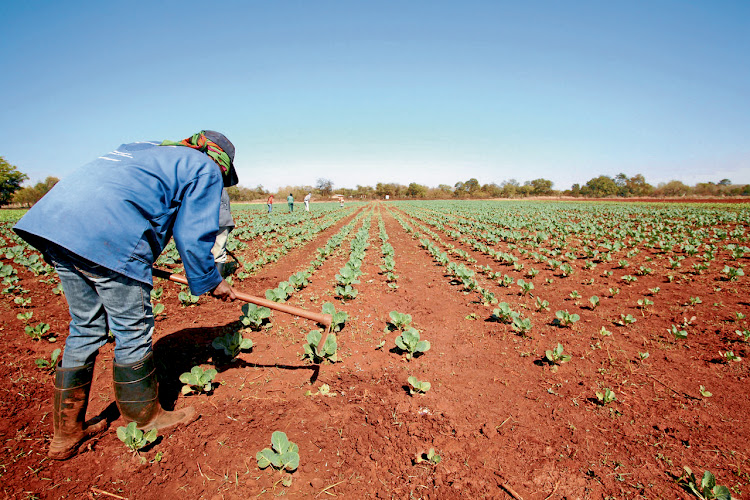 AT RISK Farmers are leaving their farms for fear of being attacked, putting their livelihoods and those of their workers at stake.
Image: Johnny Onverwacht

When she hears of a farming family being brutally attacked, tortured or murdered, Bloemfontein emerging farmer Mimmie Jakobs has flashbacks to the moment three men burst into her home. 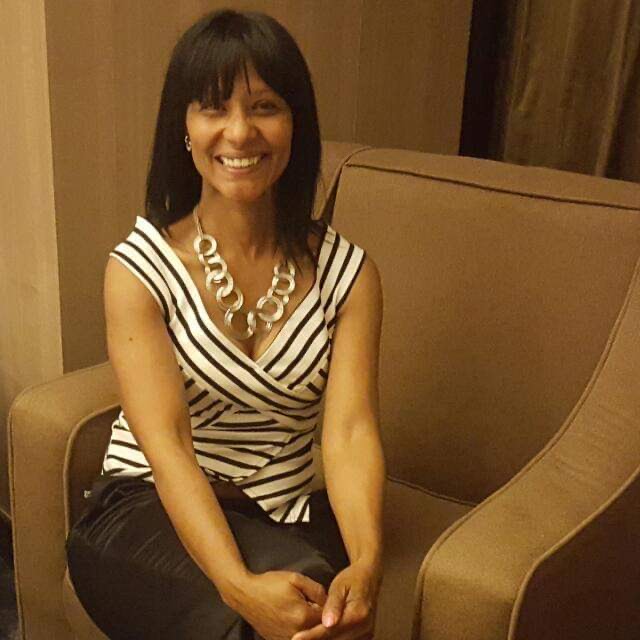 LUCKY TO BE ALIVE Emerging farmer Mimmie Jakobs who was attacked on her Bloemfontein farm and left for dead.
Image: Supplied

Stabbed multiple times, beaten to a pulp, her jaw broken, face fractured and left for dead, Jakobs, who farms lucerne and pecan nuts, stumbled for nearly 14km through neighbours’ fields, in the dark, before she found help.

“I remember thinking of all the projects I had left, all the work that I wanted to do on the farm, who would look after my workers and that I was not ready to die.”

Since her attack in February, and after multiple hospital admissions, Jakobs, like hundreds of established and emerging farmers who have survived violent attacks, is battling to get back on her feet and keep her farm productive.

“It’s been a struggle. For two years I have battled crippling infrastructure theft and then I was attacked.”

Economists, food security experts and rural community researchers warn that SA faces a dire job and food-supply security risk because of the criminal onslaught against the country’s 300,000 emerging farmers and 40,000 established commercial farmers.

Research by Agri SA shows that, on average, a farm will be abandoned for up to five years by a farmer who is violently attacked, with dozens of workers and their dependants losing their livelihoods.

According to Stats SA data released in March, 757,628 people are employed in the agricultural sector, down from 769,594 in 2007. The sector contributes three percent to the GDP.

“If you are not in production, you and your workers are in jeopardy. It’s not just one family which is impacted. Most farmers employ 10 workers. That’s 10 families, who have up to six dependants, who lose out on food and money,” Jakobs said.

This week, tempers flared in Newcastle in KwaZulu-Natal, where farm owners and workers attended a safety imbizo convened by police minister Bheki Cele after the deaths of Glen Rafferty and his wife, Vida, of Normandien. They were shot and killed at  their farmhouse last month. Police did not respond to detailed questions about farm attacks this week.

Koos Odendaal, who oversees safety in the Rouxville and Aliwal North farming communities in the Free State and Eastern Cape, said the areas were under fire from criminals and that attacks had recently begun again.

“Five years ago it was rough. It went quiet, but we are still feeling the impact, where farmers have simply left their farms. After Dr Ben Cilliers was murdered on his Rouxville farm in January 2016, his family left the farm. Their four farm workers and families were left destitute. In Rouxville there were over 250 farmers. Now there are 120. Crime has seen farmers leave.”

Odendaal said the impact of Cilliers’s death was huge. 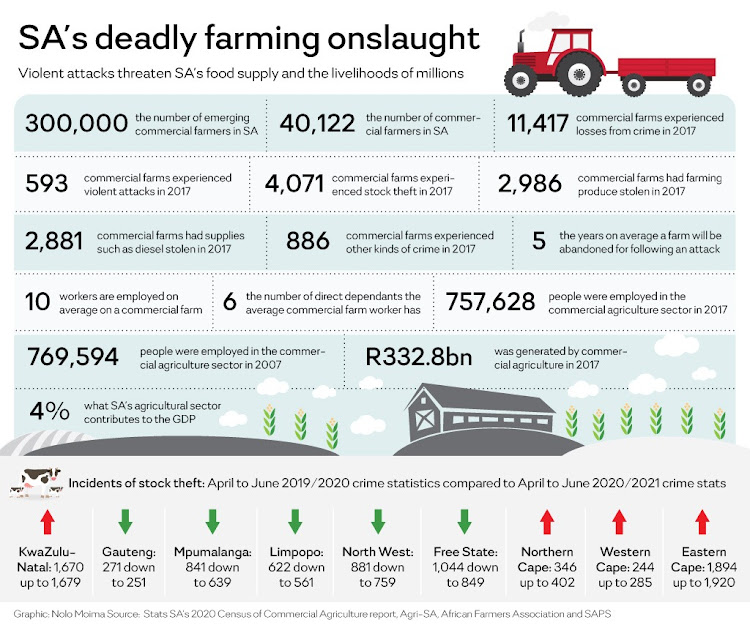 A breakdown of SA's farming sector, from the number of farmers and workers to income generated and how many people it supports. Click to enlarge.
Image: Nolo Moima

“He was the local doctor in the township. Hundreds would go to him for medical help. Today they still don’t have a doctor.”

Agri SA executive director Christo van Rheede said farmers are not just targeted for weapons, livestock, vehicles or cash. “Criminals come for diesel, pumps, fencing and electrical cabling. If you try to stop them they kill you and your workers. This year alone 35 emerging livestock farmers, who are members of the eMangweni Farmers’ Association in KwaZulu-Natal, were killed.”

Dr Vuyo Mahlati, president of the African Farms’ Association, said farm workers bore the brunt as they had no safety net if farmers left their land.

Agbiz agricultural economist Wandile Sihlobo said security must be improved urgently in rural communities. He said if crime against the farming sector was not addressed it would make it increasingly difficult for farmers to feed SA.

Data shows the number of farmers murdered in KwaZulu-Natal is at its highest in the past three years, with four farmers killed this year so far compared with one a year in the previous two years.

He said farm workers are often seen as soft targets.

Sandy La Marque, KwaZulu-Natal Agricultural Union CEO, said since lockdown levels decreased they have seen an increase in crimes such as stock and crop theft, and arson, with an increase in farm attacks and murders.

Data shows the number of farmers murdered in KwaZulu-Natal is at its highest in the past three years, with four farmers killed this year so far compared with one a year in the previous two years.

How serious, from a policing and governance perspective, is rural safety taken and what steps have been taken by the ministry to address crimes, including the murder of farmers and farm workers, both emerging and established, as well as stock theft?

SAPS spokesperson Lirandzu Themba said farm attacks and murders fell into the “most serious category of crimes that the SAPS reports on”.

“Rural safety has been beefed up in the SAPS through the reviewing of the National Rural Safety Strategy (NRSS) that was launched last year in Limpopo. It was adopted in response to the threat that crimes in rural areas, including murders and attacks on farmers, pose to the rural economy, agriculture, food security and peace and stability of the country.

“The NRSS recognises the need for a national response to address crime in rural areas and the need to work with stakeholders in and outside government. The consultation process of the NRSS was wide-ranging with all concerned stakeholders. The implementation of the plan will take place over a period of five years and end in March 2025,” she said.

“All incidents in rural areas ... are analysed weekly and provinces and police stations are tasked with addressing identified hotspots. Rural safety coordinators have been identified to coordinate all activities within the rural policing areas to strengthen the implementation of the NRSS at police station level. The NRSS is a work in progress and is being implemented in hundreds of police stations across the country.

“Collaboration is needed to improve rural safety. The NRSS is reliant on coordination between government and stakeholders, such as farmers and private security, to ensure it works. All role players in the rural and farming community, including civil society, are involved in the committees ... to support and implement the NRSS,” said Themba.