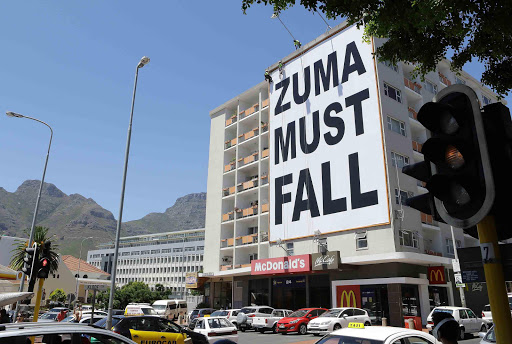 THE OFFENDER The 'Zuma Must Fall' billboard caused a buzz on social media when it was erected in 2016.
Image: Ruvan Boshoff

The Cape Town building on which a gigantic "Zuma Must Fall" billboard was erected in 2016 is the subject of a recent high court judgment.

The billboard, which caused much buzz on social media at the time, was on the Overbeek in Kloof Street in the Cape Town CBD. The advertising spot is renowned for creative billboards.

However, it has resulted in a comprehensive judgment handed down by the Cape Town high court on Friday.

The body corporate of the building sued Independent Outdoor Media, whose business is  “the display and management of advertising signs and space on behalf of various clients for monetary reward”, and which had a contract to use the lucrative advertising space.

A company that sells medical supplies and personal protective equipment has been castigated by the ad watchdog for an anti-vaccination billboard.
News
10 months ago

According the judgment, the “amount of advertising fees generated in connection with the advertising on this building, at one stage, amounted to approximately R345,000 per month”. The bone of contention between the body corporate and the advertising company was the advertising contract. The parties entered into such contracts in 1999 and 2000, for five years. They expired in 2004 and 2005, respectively.

But the media company insisted the “authorisations have not lapsed and remain valid in perpetuity”. The City of Cape Town entered the fray, insisting “any further use of this advertising space is and remains unlawful”.

The city sued the body corporate and the advertising company in 2016 for the removal of the Zuma Must Fall billboard. At the time, the city said it contravened its outdoor advertising and signage by-law, and was erected in contravention of the National Building Regulations and Standards Act.

A manufacturing operation which will allow next-generation vaccines to be manufactured in SA for the rest of the continent was launched in Cape Town ...
News
4 months ago

The advertising company argued that the city’s “laws and regulations fall to be struck down as void because they were promulgated without complying with the National Building Regulations and the Building Standards Act”.

Meanwhile, the city sought an order to declare a certain section of the act “unconstitutional, invalid and of no force and effect”. The city argued that the contentious section of the act "impermissibly infringes upon a municipalities power to legislate, is beyond parliamentary competence, usurps the powers of the courts, impermissibly regulates constitutional matters and accordingly infringes upon the doctrine of the separation of powers".

“This because it treats municipal by-laws on the same footing as administrative decision-making. Put in another way, this means that it permits the [minister] to control and enjoy a veto in respect of original municipal legislation.

The party wants some limitations to be relaxed and some to be done away with.
Politics
4 months ago

"The argument is made that the impugned section is untenable under our new constitutional democracy and also infringes upon the framework which vests local governments with independent and original legislative powers.”