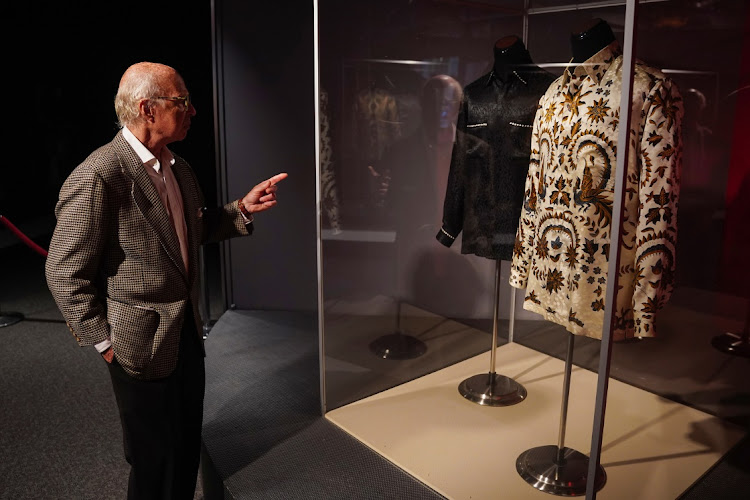 Arlan Ettinger, president of Guernsey's auctions, talks as he points to shirts formerly belonging to Nelson Mandela that were meant to go up for auction in New York to raise funds for charity.
Image: REUTERS/Carlo Allegri

Accusations of theft stand at the centre of the controversial, now-cancelled, US auction of items and artefacts belonging to former president Nelson Mandela.

On January 28, New York-based Guernsey’s auction house was due to put up for bid about 100 of Mandela’s personal items, ranging from his iconic colourful patterned shirts, gifts from former US president Barack Obama and other heads of state, as well as some of the statesman’s personal effects such as glasses and briefcases.

The auction was done under the auspices of raising money for a memorial guardian at Mandela’s burial site in Qunu in the Eastern Cape. But it was the inclusion of a key to Mandela’s cell in Robben Island — offered to the auction by his former prison guard Christo Brand — that caused consternation and resulted in the involvement of the arts and culture ministry. Ultimately, Brand said he would withdraw the item from auction.

But now it appears the auction has been completely cancelled.

There is no longer any reference to the auction on the Guernsey’s website, and US news site Page Six, quoting Guernsey’s president Arlan Ettinger, said the auction was no longer going ahead as “we had a major controversy”.

Ettinger was also quoted as saying the SA Heritage Resources Agency (SAHRA) “determined that these items were potential national treasures, and hence when something is designated [as such], it requires permits to leave SA”. He added the “Mandela family didn’t apply for permits because they didn’t know they had to”.

Sunday Times Daily has reached out to Guernsey’s and the SAHRA for comment.

At the centre of the auction controversy, however, are allegations that Makaziwe Mandela removed the items from Mandela’s Houghton house. Sunday Times Daily contacted Makaziwe on Friday morning, but after the reporter introduced himself, she immediately cut the call. There was also no response to text and WhatsApp messages requesting comment.

Parliament promises ‘no fanciful things’ at a Sona sans bling

This is what the address, for which R1.9m has been budgeted, will look like. However, the cost could ‘come down’
Politics
4 months ago

Ndaba Mandela said on Friday that, in March last year, while he was not at the Houghton home, Makaziwe came to the house and started “removing” various items.

He said his younger brother, Andile, was at the house at the time.

He said Makaziwe “removed the bed, paintings, carpets, you name it ...”

He said he then opened theft charges against Makaziwe at the Norwood police station in Johannesburg.

SAPS spokesperson Lt-Col Mavela Masondo said: “A case of theft was opened at the Norwood police station. Statements were obtained from the witnesses and warning statement obtained from the suspect. The docket was then taken to court for a decision.”

“Police are still waiting for a decision from court,” Masondo said.

Ndaba said his aunt went “rogue” and did not have the family’s go-ahead for the auction.

“This is not a family feud. One member of the family decided that it’s her right — or whatever it may be — and will benefit individually. She may have put some money into the memorial guardian ... but we would not have seen a single rand of that money.

“Why wouldn’t she tell us that this is her plan? She didn’t tell us that she took the items to auction for a memorial garden. That’s why I don’t believe her.

“If it was that honest and open, why didn’t she tell us? If it was that ... we would have, as a family, voted to maybe take some of my grandfather’s items and put them up for auction in America.

“This was a situation of one member trying to take advantage,” he said.

Ndaba said that several family members had rallied around him in trying to stop the auction taking place.

In an email to Ettinger, dated November 21 last year and provided to Sunday Times Daily, US-based legal counsel Eric S Lerner, acting on behalf of Ndaba and other family members, said that some of the items up for bid were “taken without requisite permission from [Mandela’s] former residence at 9 12th Avenue, Houghton Estate, Johannesburg ... by Makaziwe Mandela-Amuah on March 13 2021”.

Where there is a will, they will find a way for the new Zulu king

“The family members who occupy the Houghton Home are pursuing a criminal investigation of the incident.

“We have also been in contact with president Mandela’s daughter, ambassador Zenani Mandela, who expressed her support of the family members in this matter and shared her deep concern over, and objection to, her father’s improperly obtained items being auctioned by Guernsey’s.

“The family members assert that the auction is offering at least eleven items of great value, ten of president Mandela's iconic shirts and his passport, that were... removed from the Houghton home under highly questionable circumstances ... without permission,” the letter reads.

SAHRA CEO Adv Lungisa Malgas confirmed that the export of these “heritage items” was against the law. There were 33 items that were under consideration, she said.

“The exportation of these protected objects was done in contravention of section 32 (19) of the National Heritage Resources Act, No. 25 of 1999, which is applicable to both private and state-owned property. The NHRA makes provision for penalties in this regard.

“The objects associated with significant figures, events and national leaders in SA’s history form part of the National Estate of SA, and as such, when exported, must follow the permit application process by SAHRA as mandated by the NHRA.

It must further be noted that though some of these objects may be the property of Christo Brand and others of the Mandela family respectively, these are heritage objects that form part of the National Estate of SA. This necessitates that a permit must be applied for from SAHRA before the intended export. The exportation thereof is regulated by SAHRA, and an assessment of their significance is made before their export, based on criteria in the NHRA. Even when such objects are refused export, the owner has the right to appeal against SAHRA’s decision,” said Malgas.

She said this “national estate” is made up of a wide variety of heritage resources, and collectively “they hold the history of our country though their material evidence”.

“At present SAHRA cannot make any determination on the significance of the objects as they did not follow due process, and consequently we have not been able to conduct an assessment. The purpose of regulating the movement of heritage objects and the owner/custodian having to apply for a permit to export heritage objects such as these, is so that SAHRA can assess the significance of these objects based on criteria stipulated in the NHRA, to issue, or refuse permits for each object based on that assessment.

“As part and parcel of that process we consult with various expert advisers to assess significance; armed with that detailed information SAHRA makes the decision to issue or refuse any permit which is applied for. Nevertheless, all objects which are associated with our former presidents, leaders, artists, scientists, and other individuals that contributed to the development of SA, are considered heritage objects that form part of the national estate of the country,” she said in response to questions.

Malgas said the issue of the 33 items — the details of which weren’t specified — was tackled by the agency, working with the arts and culture department, the Robben Island Museum, and the international relations and co-operation department, among others.

“On December 23, SAHRA was made aware of the intended auction by Guernsey’s auction house in New York. SAHRA corresponded with the auction house to request that the auction be suspended with immediate effect and requested clarification on other pertinent matters including current location and provenance of the listed heritage objects. A virtual meeting was held on January 5 with Guernsey’s and relevant parties, in which the auction house agreed to co-operate with us and suspend the auction,” said Malgas.

The man who owned the key to Nelson Mandela’s cell during his incarceration at Robben Island says he is in discussions with auction house Guernsey’s ...
News
4 months ago

Sports, arts and culture minister Nathi Mthethwa has ordered that urgent action be taken after reports of plans to auction the key to the cell of ...
Politics
4 months ago

Nelson Mandela's once-elegant Houghton home in Johannesburg - which hosted some of the world's leading figures while the former president was alive - ...
News
1 year ago