Empty promises and a department that’s supposed to look after military veterans, but doesn’t, are unacceptable 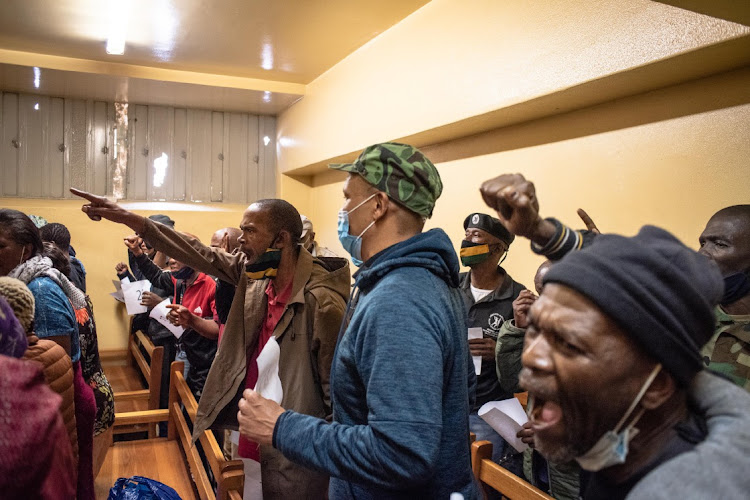 The late 1950s was an era of growing resistance to the apartheid state’s application of discriminatory laws in SA. The resistance, led by the ANC and PAC, was met with harsh state suppression.

The massacre in 1960 of 69 black people protesting against being forced to carry identity documents that restricted their movement was a turning point for the movements. It precipitated their move away from passive, non-violent resistance towards the armed struggle.

In 1961, the ANC formed its armed wing, Umkhonto we Sizwe (MK) (Spear of the nation). The PAC formed the Azanian People’s Liberation Army (Apla). The aim was to violently challenge white minority rule. Both embarked on campaigns of armed resistance against the state, including acts of sabotage and guerrilla warfare.

The most spectacular symbolic attacks on the apartheid state were the attacks on Sasol’s coal-to-oil refinery in Sasolburg, the Koeberg nuclear power station in 1982 and the South African Defence Force (SADF) headquarters in Pretoria in 1983.

As state repression increased, especially after the Soweto uprising of schoolchildren in 1976, many young black South Africans flocked to join the liberation movements and their armed wings in exile.

This last-minute spike raised eyebrows at the time and can be blamed, in part, for the unhappiness that ensued. The numbers went up because it was felt necessary to boost the relatively small number of liberation fighters, compared with the apartheid-era SADF, which had 675,000 active-duty force members and 360,000 in the citizen forces in 1993.

But the large sign-ups were controversial and created tensions that have simmered for decades.

On top of this, the dismantling of these armed forces and that of the apartheid state was, in retrospect, managed badly. The result is that it left in its wake thousands of angry veterans who felt betrayed. In recent years they have come out vociferously against the ruling ANC. Most recently, 53 veterans were charged with taking government ministers hostage in an attempt to get the state to fulfil promises they say were broken.

For decades sociologists have warned that military veterans would use their skills to cause instability if their needs weren’t addressed. Lephophotho Mashike, who has researched the subject extensively, called them a 'a ticking time bomb'.

For decades sociologists have warned that military veterans would use their skills to cause instability if their needs weren’t addressed. Lephophotho Mashike, who has researched the subject extensively, called them a “a ticking time bomb”.

The end of the armed hostilities after the end of apartheid in 1994 meant the establishment of a new united military, the South African National Defence Force (SANDF). The former guerrillas and armies of the former nominally independent states of Venda, Bophuthatswana, Ciskei and Transkei were integrated into the new defence force or demobilised.

When the integration process was finalised in 2001, 44,143 names appeared on the collective Non-Statutory Force Certified Personnel Register. Of these, 15,805 were integrated into the SANDF, 9,771 demobilised and 13,117 neither integrated or demobilised.

Those who were demobilised weren’t considered fit to serve in the new army due to ill health or age. Each received a gratuity based on their years of service. They could choose to receive a lump sum or monthly pension.

Military veterans complained that the payments were inadequate. Many have remained destitute due to poor education, lack of marketable skills, health problems and inability to reintegrate into society.

A 2006 report, “Only Useful Until Democracy”, found 73% of military veterans believed SA’s postapartheid leaders had forgotten them. More than 84% felt their compensation was not adequate and they were neglected and abandoned by the ANC government.

And a study I conducted in 2012 with researcher Henrietta Bwalya found military veterans were frustrated by slow payments. They were living in abject poverty and felt used, neglected and marginalised in the new political dispensation.

In 2007 they finally seemed to have attracted the earnest attention they had been seeking. This was at the ANC’s national conference in Polokwane, at which Jacob Zuma was elected president of the ANC.

The conference pledged to provide veterans with extensive welfare support, adopting a resolution that committed the ANC to taking direct interest in the welfare and reintegration of its former soldiers into civilian life.

The department has consistently underperformed in terms of meeting the needs of veterans. It’s plagued by mismanagement and corruption, including wasteful, irregular and fruitless expenditure.

Two years later, and after Zuma had become the president of the country, the department of military veterans was created. It was placed under the department of defence, with the remit of managing veterans’ affairs.

In 2011 the Military Veterans Act was promulgated. It obliged the state to provide military veterans access to healthcare, subsidised public transport, education, skills and job training, as well as burial support. This was subject to meeting a needs test.

This has been largely attributed to lack of capacity and poor administration in the department. This was reflected in the deliberations of parliament’s select committee on security and justice in March.

The department has consistently underperformed in terms of meeting the needs of veterans. It’s plagued by mismanagement and corruption, including wasteful, irregular and fruitless expenditure.

Discontent among military veterans took an extreme turn in October. A group of them allegedly held two government ministers and a deputy minister hostage. They demanded government jobs, R4.2m in compensation each, land for housing and free education for their dependents.

The group, calling itself the Liberation Struggle War Veterans, is made up of former members of Umkhonto we Sizwe, Apla and the Azanian National Liberation Army (Azanla), allied to the Black Consciousness Movement. Azanla was not officially disbanded during the negotiations to end apartheid, as the Black Consciousness Movement boycotted the talks. They were therefore latecomers to the compensation process.

What needs to be done

Military veterans constitute a small but vocal constituency in the ANC and form a powerful political bloc that’s been closely aligned to Zuma.

It’s neither sensible nor desirable that the maladministration that’s affected their lives is allowed to continue, as a recent report by the public protector pointed out.

Lindy Heinecken is chair of the department of sociology and social anthropology at Stellenbosch University.

— This article was first published by the The Conversation.