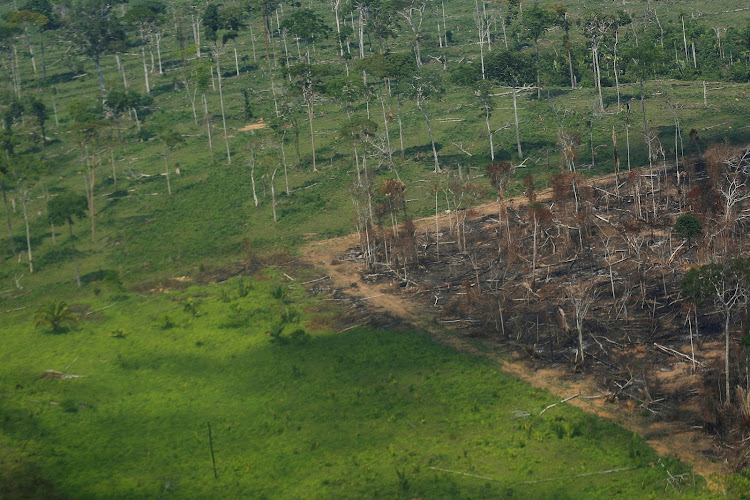 BURN OUT A deforested plot of the Amazon rainforest in Rondonia State, Brazil.
Image: REUTERS/Adriano Machado

At the entrance to the Jaminawa territory, a disputed forest area near the Purus River in the Brazilian Amazon, a sign alerted visitors they were entering indigenous land, until it was burned down this year by invaders, along with many trees.

Indigenous leader Francisco Jaminawa said cattle ranchers were probably responsible for the fires on the land, which is protected from deforestation by a decade-old court decision.

“Every year they come in, they disrespect us,” he told the Thomson Reuters Foundation. “They knock everything down and then plant grass for their cattle.”

Worldwide, tropical forest losses amounted to 3.75-million hectares last year, a rate equal to 10 football pitches a minute, according to new data from the University of Maryland published by Global Forest Watch (GFW).

That figure was 11% lower than in 2020, mainly due to wetter weather, but did not signal a broader downward trend in deforestation, warned researchers with the monitoring service run by the Washington-based World Resources Institute. Forest losses caused by factors other than fires have stayed consistent over the last few years, with annual fluctuations usually linked to the severity of fires, which is in turn driven by weather patterns, said Mikaela Weisse, GFW’s deputy director.

Cutting down forests has major implications for global goals to curb climate change, as trees absorb about a third of the planet-warming carbon emissions produced worldwide.

Forests also provide food and income for people living in or near them, are an essential habitat for wildlife, aid rainfall and prevent flooding.

People cut, burn, plant, use up the soil nutrients and then move on in the next few years. It is certainly a recipe for disaster.

Paolo Cerutti, senior scientist with the Centre for International Forestry Research in Nairobi

More than 40% of the global forest loss occurred in Brazil, where losses caused by factors other than fires rose 9% between 2020 and 2021, largely associated with agricultural expansion.

Francisco Jaminawa leads a community of about 180 villagers at São Paulino, inside his people’s territory which lies at the border between Amazonas and Acre, two Amazon states where deforestation was most rampant last year, according to GFW data.

Since the 2000s, community members have fought for the right to live on their ancestral lands, but in the past few years they have been losing the battle to increasingly aggressive cattle ranchers, said Jaminawa.

The farmers feel emboldened by far-right president Jair Bolsonaro, who has weakened environmental bodies and turned Brazil’s indigenous affairs agency Funai against those it is meant to protect.

Jaminawa said most of his community’s “good land” had been taken, leaving them with almost nothing to subsist on.

“It’s very sad, our life in this community. We are cornered,” he added.

In Africa, primary forest loss in the DRC stayed persistently high in 2021, mainly due to small-scale farming and local energy needs, GFW said.

“People cut, burn, plant, use up the soil nutrients and then move on in the next few years,” said Paolo Cerutti, senior scientist with the Centre for International Forestry Research in Nairobi. “It is certainly a recipe for disaster.”

The DRC is home to the world’s second-largest rainforest and has a population of more than 90-million that is expected to hit 200-million by 2050, according to the World Population Review.

“The difficulty is when you have millions of smallholders deforesting ... you can’t just ban their activities as governments can do with some multinationals or large-scale concessions — they are not criminals,” said Cerutti.

A holistic approach that supports communities while tackling deforestation would involve a range of measures such as planting trees on farmland, introducing fast-growing trees to make charcoal and adding clean power infrastructure, he noted.

Last July, the DRC’s environment minister put forward a 10-point plan to sustainably manage natural resources, including a carbon tax and a review of forestry concessions to allow for controlled logging — a move criticised by environmentalists.

“The environment is (now) top of the agenda and this is very important — the big question is how will it trickle down to the people,” said Cerutti.

The Amazon is drying out fast, and that’s very bad news for the planet

If it dies, thousands of species will be killed and carbon dioxide release will put paid to bids to limit climate change
Opinion & Analysis
2 months ago

In Southeast Asia, Indonesia’s primary forest losses declined for the fifth straight year, down 25% from 2020, according to GFW, indicating the Southeast Asian nation is on the right track to meet some of its climate goals.

After forest fires in 2015, Indonesia introduced a series of policies to protect and restore forests, and ramped up monitoring to tackle seasonal fires.

In addition, the palm oil industry has made efforts to become more sustainable, with the government and business working effectively together, GFW researchers noted.

Neighbouring Malaysia also had a fifth year of declining forest losses but, they warned, high prices for palm oil — of which both nations are top producers — could fuel deforestation risks.

Last November, Indonesia and Malaysia were among 141 countries that pledged to halt and reverse deforestation and land degradation by 2030 at the COP26 climate talks in Glasgow.

Most of the 2021 forest losses happened before that promise, so the new data can be used as a baseline to track progress, said Weisse, noting there is little time left to meet the goal.

“We really need to see very rapid declines across the board,” she said, urging governments to introduce domestic policies to deliver on their international commitments.