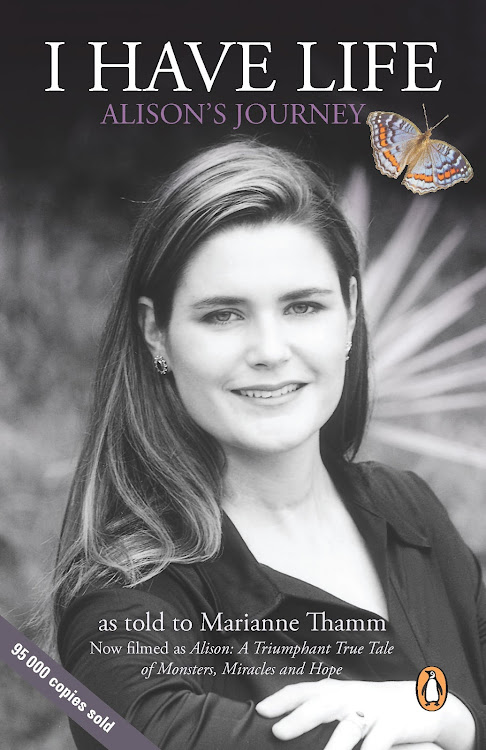 Alison Botha’s story of survival is now a film too.
Image: Supplied

This article was originally published in the Sunday Times on June 6 2016.

They slashed her throat so deeply she had to hold her own head on as she crawled to the road for help. With her other hand she had to hold in the organs spilling from her stomach, where she had been stabbed more than 30 times.

By some miracle – and this is a word that crops up frequently in Alison’s story – the knife thrusts had missed her main arteries, so she did not bleed to death and was able to breathe through her severed trachea.

The 27-year-old survived and made it her life’s purpose to help others find strength. She published a book about her journey, on which a play was based, and gives talks all over South Africa and the world.

She has now made a docudrama, just titled Alison, directed by Cape Town-based Uga Carlini, who has wanted to make it since hearing Alison speak on a packed rugby field in 1999.

“Alison was so far away from me I couldn’t even see her face, but I could hear her clearly through the sound system and I’ll never forget her ability to make you feel she’s there just because of you,” said Carlini.

“She speaks right into your heart and you feel like you’ve known her all your life. I felt that and I could see it in everyone around me. These tough ooms next to me were even crying. Not because her story is sad but because it is so uplifting, this connection she has with people, her honesty. Something so bad happened to her but she turns it around and shows you it’s not about that.”

This is exactly how I felt when I met Alison in Port Elizabeth in 1996, just more than a year after the attack. She was in the middle of a series of operations to repair her abdomen.

But Alison was somehow able to make strangers feel at ease despite the livid scar all the way across her neck.

Two decades later, the scar has faded, although it is still visible.

And the Alison that appears in Carlini’s film is a softer, more motherly version of the steely girl facing down injuries that should have been fatal.

Speaking 21 years since he last saw her, anaesthetist Dr David Comyn, who presided over the emergency operations to stitch up Alison’s throat and abdomen, wiped away tears as he described her wounds.

He is not the only one to become emotional on camera. So do the prosecutor, the investigating officer, and Dr Tiaan Eilerd, who found Alison on the road and held her hand until the ambulance arrived.

A student of veterinary science at the time, Eilerd decided after that night to become a doctor instead, and delivered Alison’s second son – that she could bear children was yet another miracle.

From her home in George, Alison said she had to prepare herself for telling her children what happened to her. “I have never lied to my sons – I didn’t want them to find out what happened by picking up my book or seeing me on TV – but I have never told them more than they were asking. My oldest son was about five when he asked about the scar on my neck.

“I just said, ‘Mommy was hurt, and sometimes when you get hurt you get a scar afterwards.’ And that was enough. They guide themselves in what they are able to digest. As they have got older and can comprehend more they have wanted to know more,” Alison said.

She did not want the film to be a grisly crime drama, although it does not shy away from the horrific events of 1994. “I’m glad I didn’t have to be there when they filmed the re-enactment,” she said.

“I think they have captured the essence of it – the horror and the fear and then that complete miraculous lightness of: ‘Oh wow, how did I survive this?’ They’ve got that.”

The film includes an interview with Judge Chris Jansen, who sentenced Du Toit and Kruger to life in jail without the option of parole. “I needed to make it clear they were a threat to society and should never be released,” said Jansen.

That, however, has changed. Just after they began work on the film, Alison and Carlini learned that all prisoners sentenced prior to October 2004 had become eligible for parole. During filming, Du Toit contacted Carlini from prison, using a warder’s cellphone.

He offered an interview on camera in exchange for a signed letter of forgiveness from Alison and backdated profits from her book and her motivational talks. The offer was declined.

The possibility of her attackers being released has, said Alison, been hardest on her family. “Before that I always brushed over the baddies by saying the police caught them and they went to jail for life and we’ll never see them again. But I want to bring my sons up with the values that have become most important to me – the knowledge that we can’t control what happens but we can choose how we react to it.”

Alison hopes the film will highlight the need to protect victims of violence. “I have had to go out of my way to try and be part of those parole hearings. I was not approached or guided at all. I have the connections and the know-how to find out what is going on and try to change it – but what about all the others? What about people who don’t even know where to start?

“I’m not an activist, but there is a need to show what victims go through. People tell me, ‘I’m so glad you’re over what happened to you,’ and I don’t want to burst their bubble but it is never behind you, it doesn’t ever not matter. You can choose every day to have a good day or a bad day and I have grown up enough not to blame every bad day on being a victim of rape and attempted murder, but it is never over.”

Carlini said one of Alison’s bravest acts, in the film as well as the book, is saying how her body responded while she was being raped. Psychologists say this is a common survival mechanism, the body’s way of trying to prevent hurt, but it is a reaction of which rape victims are often needlessly ashamed. The rape victim’s body responds involuntarily as though it were aroused.

“I was so nervous about saying that,” said Alison. “If I’d written the book on my own I probably would have brushed over it, but Marianne [Thamm, co-writer of I Have Life] made me see how important it was, and I have lost count of the number of women who have come to thank me for saying it.

“This is why I do what I do, and my hope is that the movie will reach many more people.”

“The message is for everyone, it’s to say that we don’t have to continually strive to be more or different or knock ourselves down for not doing better. All we have to do is get through the day in the best way we can, and that’s enough.”

The film Alison is showing at various venues during the Encounters film festival in Cape Town and Johannesburg. It will also be shown at the Durban International Film Festival.

A new edition of I Have Life: Alison’s Journey, by Marianne Thamm with an additional chapter by Alison Botha, will be published in June by Penguin Random House.