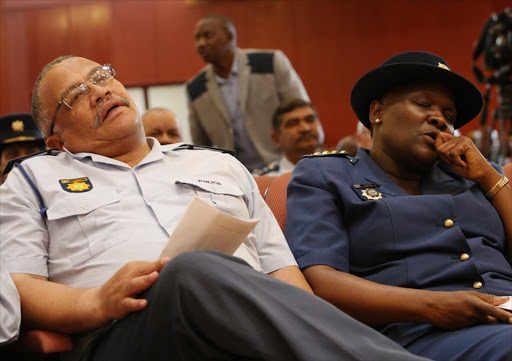 Suspended police chief Riah Phiyega stands accused of illegally accessing a top-secret interception file that allowed her to be let off the hook on criminal charges in 2013.

This is detailed in an explosive affidavit, seen by the Sunday Times, that forms the basis of a new criminal complaint laid against her last week of defeating the ends of justice and violating interception law. The affidavit was made by Captain Dominic Ntokozo Mjiyako, a legal adviser in the police’s crime intelligence division, who opened the case at Sunnyside police station in Pretoria.

It’s understood the case was immediately transferred to the office of Hawks head Lieutenant-General Berning Ntlemeza.

Police spokesman Brigadier Hangwani Mulaudzi has confirmed that the case is being investigated but declined to comment on it.

The complaint centres around a meeting held at the Sheraton Hotel in Pretoria on October 26 2013, to discuss the case of defeating the ends of justice opened against Phiyega for tipping off Western Cape police commissioner Lieutenant-General Arno Lamoer about a case against him.

In intercepted recordings obtained by the Sunday Times, Phiyega can be heard telling Lamoer that a police investigation had linked him to a drug dealer. Lamoer has since been charged with corruption and suspended.

A criminal case of defeating the ends of justice was opened against Phiyega on October 19 2013.

The Independent Police Investigative Directorate investigated the case, but the National Prosecuting Authority declined to prosecute.

Police sources say this was because of what took place at the Sheraton.

Phiyega convened the Sheraton meeting a week after the case was opened against her.

During the meeting Nemutanzhela arranged for the interception file to be brought from the crime intelligence offices in Pretoria, Mjiyako says in his statement. It was passed around the table and given to Mjiyako to scrutinise for any technical errors that could be used to let Phiyega off the hook.

“I did express my concerns about the lawfulness of bringing the interception file to the meeting to be perused, especially in the light of the criminal case that had already been opened against the national commissioner,” says Mjiyako.

“My concerns were unfortunately ignored and General Phiyega commented to the effect that it was her reputation that was at risk and needed to be defended.”

Mjiyako, who is facing unrelated disciplinary charges, said removing an interception file from the crime intelligence offices and allowing its contents to be divulged, especially to those under investigation, was a criminal offence.

“Interception files are classified as ‘top secret’ and can only be perused or the information contained therein can only be disclosed under very strict and specific circumstances,” he said.

The only reason the file was brought to the meeting was “to tamper with the contents thereof and to circumvent the criminal case that had been opened against Phiyega”, he said.

This didn’t meet the legal criteria for removing the file from the crime intelligence offices, he said.

Mjiyako spotted two technical deficiencies in the interception file: former crime intelligence head Chris Ngcobo had authorised the phone tap before receiving the motivating affidavit, which wasn’t signed in the presence of a commissioner of oaths.

This effectively torpedoed the case against Phiyega as these errors would have proved an embarrassment to the crime intelligence division and the authorising judge, a police source close to the investigation said.

“The captain found a technicality that exonerated Riah Phiyega,” he said. “It didn’t go to court because it would have been too embarrassing so she got away.”

Phiyega said she would not respond to “baseless allegations which are part of a broad vilification campaign and the abuse to state resources to assassinate my character”.

Sources present at the meeting cast doubt on Mjiyako’s version of the event.

“Why would a national commissioner jump the entire chain of command and give instructions to a captain, leaving out his commanders who were present in the meeting? At the time of the meeting, the docket was already with Ipid and copies of the transcript were already with the media.”

They pointed out the technical deficiencies in the interception file were not material and could be remedied.

They also pointed out Mjiyako was arrested in 2013 for a cigarette hijacking incident and subsequently suspended for involvement in an armed robbery.

Mjiyako had an axe to grind with Nemutanzhela, who’s in charge of the secret service fund, as he couldn’t account for secret service money given to him that was later deducted from his salary, a source said. “This obviously upset him intensely.”

He is “a rather frustrated young man of questionable character who is trying to find a way out of the legal and disciplinary problems he has”.