Costly land at centre of row 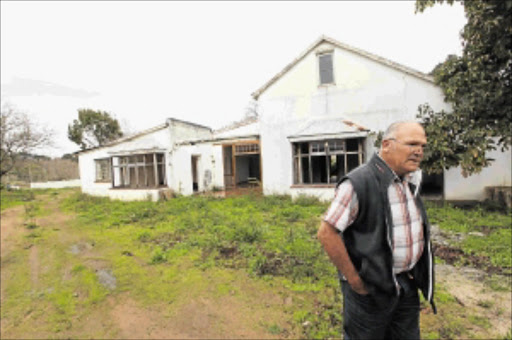 Dawood Sadien at the house where he grew up on a Constantia farm that was bought for a few thousand rands in 1963 and is today a R134-million land-claims battlefield Picture: ESA ALEXANDER

Fifty years ago they were neighbours, exchanging greetings across the vineyards flanking Cape Town.

Now the Sadien and Badenhorst families exchange legal letters and unfriendly stares across a court room as their lawyers wrestle with one of the Mother City's bitterest land claims.

At stake is a 5ha slice of what was once farmland - now lying fallow but estimated to be worth up to R134-million - between the Constantia mansions.

The land is empty except for a natural spring, two derelict houses, a half-finished road, a guardhouse and a security guard sitting under a tree.

The Sadien family say the property was once a bustling farm and heart of their market garden business. This was before Constantia was declared a white area under the Group Areas Act .

In March 1962 the land was bought at auction for R13550 by Jacob Badenhorst, manager of the Groot Constantia wine estate at the time.

The Sadien family claim Badenhorst evicted them and started his own nursery business.

Descendants of the two families will face each other in the Land Claims Court next week.

Sadien family members claim they did not receive "fair and just compensation" for the land, on Sillery Avenue .

Their lawyers are asking the court to expropriate the farm and allow the Sadiens to start farming again.

"I would like to farm carrots and cabbages again ... that was our main farming," Dawood Sadien, 65, said this week.

"I want to farm here again to honour my parents, who were suffering for all these years."

Sadien - a pensioner - said the family had watched their ancestral home fall into wrack and ruin.

"They even took the top soil away. They must bring it back," Sadien said.

The Badenhorsts , who own a wine label that exports to Harrods in the UK , are contesting the case.

They deny there was any unfair discrimination in the original sale.

In documents before court they say the Sadien family willingly sold due to financial difficulties - and were not victims of dispossession.

Businessman Hein Badenhorst, grandson of Jacob Badenhorst, said their case would be made clear in court.

He told the Sunday Times: "Unlike the claimants and their promoters, we would rather not advance our agenda regarding Sillery (Avenue) through the media.

"Suffice to say that we return to the Land Claims Court shortly where the matter will continue.

"We're confident of our position both on the merits and in law."

The case, one of several land claims in the Constantia area, first hit the headlines two years ago.

This was after the Sadien family obtained an interdict to stop construction of a housing development on the property, where the Badenhorsts have so far invested R25-million in building roads and a large guardhouse.

The Badenhorsts said they were granted legitimate development rights to the land, but the Land Claims Court ruled that it be stopped pending the finalisation of the Sadien claim.

The farm has been left with neither crops nor houses .

Lawyers acting for the Land Claims Commission say in papers that the state will try to acquire the property "by negotiation and agreement on the price of the property" in terms of the Restitution Act.

If the parties fail to agree, the land could be expropriated and a price determined after hearing evidence from both parties.

The Western Cape Land Claims Commission could not be reached for comment.

A Land Claims Commission presentation to parliament in August last year listed 63 families with outstanding claims in the Constantia area.

A lack of funds and a shortage of alternative land were the biggest obstacles delaying settlement agreements, the presentation said.

Sadien said the family remained upbeat about their chances of a successful claim, despite the long delay.

"It looks very, very promising and I am very happy about it all. I just hope I can stay here for a few years until I leave this world," he said.

According to an oral history report submitted to court, Constantia was once a multiracial rural area relatively untouched by apartheid.