EVELINA de Bruin, who has died in Upington at 78, was one of the so-called "Upington 14" sentenced to hang in 1989 for the killing of a black police constable in 1985. 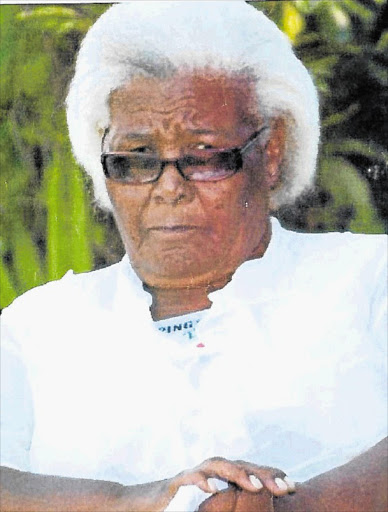 DEATH ROW: Evelina de Bruin was among those arrested for the murder of a policeman in 1985. Sentenced to death, she was reprieved in 1991

DEATH ROW: Evelina de Bruin was among those arrested for the murder of a policeman in 1985. Sentenced to death, she was reprieved in 1991

De Bruin and her husband, Gideon Madlongolwane, also sentenced to death, were found guilty of public violence, not murder, and released immediately.

By then, they had spent more than five years in prison, including two years on death row.

The municipal policeman, Lucas "Jetta" Sethwale, was killed after a crowd of 5000 demonstrators were chased from the local stadium by riot police firing rubber bullets and teargas.

About 300, including De Bruin, gathered outside the nearby home of Sethwale, who, along with other policemen employed by the township council, was hated for bullying small traders. When they began to scream threats and bombard his house with rocks, he opened fire, shooting a young boy in the spine. Then he fled, firing shots in the air, with an angry crowd in pursuit. He was caught and beaten to death. Petrol was poured over his body, which was set alight.

De Bruin was one of 26 people identified by witnesses as being present when he was killed. She was singled out by the court as having incited the crowd to stone Sethwale's house and drive him from it so he could be killed.

Only four of the accused were linked directly to the physical assault on Sethwale, including a 27-year-old male nurse, Justice Bekebeke, who said he had struck Sethwale on the head with his rifle. The court found that the blow had fractured his skull and caused serious cerebral haemorrhaging.

Although there was no evidence that De Bruin had physically participated in his killing, she was found guilty of his murder under the common-purpose doctrine.

Judge Jan Basson ruled that there were no extenuating circumstances.

He rejected arguments that Sethwale's death was the result of a spontaneous explosion of anger caused by appalling conditions in Paballelo and years of abuse by the township police.

He ruled instead that there was premeditation and that the killing was politically motivated and part of a plan to make the country ungovernable.

He rejected evidence that De Bruin had no history of political activism, that she was a committed Christian and regular churchgoer, and that her alleged participation in the killing was completely out of character.

He denied leave to appeal, and the 14 condemned were sent to Pretoria Central to await execution.

De Bruin was the only woman among them and, after the execution of convicted murderer Sandra Smith days after her arrival, the only woman on death row.

While the men were at least in contiguous cells and able to swap messages and see each other every day, De Bruin was on her own. She was separated from her husband and from her two children, who were not allowed to visit her because of their age.

She was illiterate and couldn't enjoy the diversion of books. She was allowed out of her cell for 30 minutes of exercise a day, but rheumatoid arthritis made it increasingly difficult for her to walk. She was on medication for a heart condition and high blood pressure.

In July 1989, her lawyers petitioned the chief justice for leave to appeal, which he granted.

Tempering their relief was news that their much-loved advocate, 37-year-old Anton Lubowski, a high- profile member of Swapo, had been assassinated outside his home in Windhoek, Namibia.

Meanwhile, in the face of increasing signs that she was disintegrating and might die before the appeal could be heard, her lawyers applied for bail. Her lawyers argued that she posed no threat to the community and was not a flight risk.

Judge Basson said he understood that she was suffering, "but it is to be expected that anyone awaiting execution will suffer".

The saga of the Upington 14 had been world news for some time. News of the failure of her bail application triggered a wave of protests both locally and abroad, and she became the focus of wide media interest.

There were letter campaigns, a petition was sent to state president FW de Klerk and her case was raised in parliament.

Within months, her conditions were eased. She was allowed to see her husband once a week, allowed wool in her cell so that she could crochet, permitted a visit by her children and moved back to Upington Prison to be closer to her family and friends.

De Bruin's joy at being released was soon dampened by grief at the death of her husband in September 1996.

De Bruin was born on Christmas Day 1933 and grew up in the small Northern Cape town of Postmasburg.

Her father was a farm labourer, her mother a domestic servant. They struggled to survive. One of her chores as a child was to collect discarded mielie cobs, which her mother boiled for soup.

Her parents couldn't afford to send her to school, which is why she never learnt to read or write.

In her late teens, her family of 10 moved to Upington, where they lived in a one-bedroom house with no toilet, electricity or running water.

She worked as a domestic for white families. She had seven children with her first husband and two with her second.