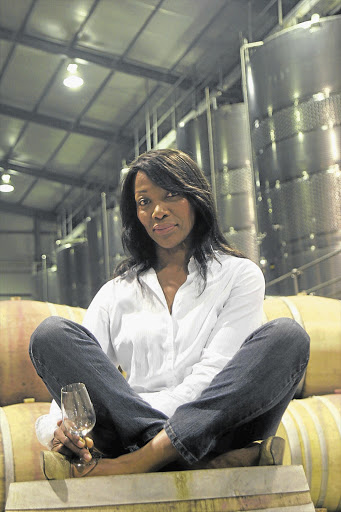 AMBITIOUS: Thembi Tobie, founder and MD of Thembi Wines, wants to own a farm by the end of the year
Image: Business Times

The wheels of transformation in the winemaking industry are turning very slowly, according to Thembi Tobie, founder and MD of Thembi Wines.

"But there is still hope," said Tobie while displaying her brands at the Cape Wine conference in Cape Town this week.

Just 2% of South Africa's wine is made by black winemakers, and M'Hudi, owned by the Rangaka Family, is the only black family-owned wine estate in the country.

Tobie said "it would be a dream come true" for her should the Department of Trade and Industry help her buy her own farm by the end of the year.

Other challenges for black winemakers include not having distribution channels and funding for marketing, promotion or educating consumers about their products, she said.

Thembi Wines, which started as a joint venture with Boland Kelder, has established its brands in the Netherlands and Belgium but is still to make its mark in South Africa.

Rangaka said unless black people who own their own brands work together, black winemakers will forever be complaining about being marginalised and becoming "branding companies" as they do not own vineyards or wineries.

Rangaka does not believe black winemakers will ever own the same number of wine farms as their white counterparts due to a lack of funding.

The SA Black Vintners Alliance, which represents the interests of local black vintners and winemakers, would like to see an increase to 5% of black-owned farmers in the industry.

The alliance has been involved in the drawing up of a charter for the wine industry and promoting an environment that is conducive for black wine entrepreneurs to flourish.