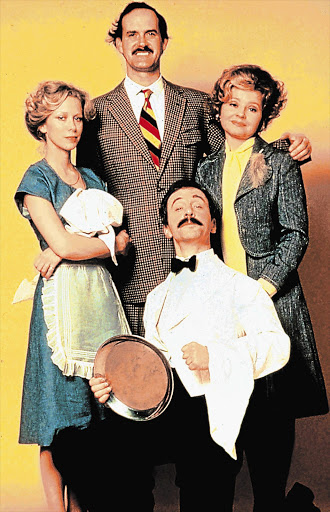 The actor and comedian on stuffed toys, his passion for lemurs and being spiritual

John Marwood Cleese, 74, is thought by millions of Monty Python followers to be one of the planet's funniest men but can cut a surprisingly spiritual, serious figure when interviewed. On asked why he adopted the middle name "Otto" for the credit roll of I'm Sorry, I'll Read that Again, he simply offers: "Because it amused me," - a tagline that would do well as the title of the memoir he is writing.

Known for his signature roles in Fawlty Towers; absurdist comedy sketch Monty Python; and more recently in the South African film Spud, the gangly Englishman has also earned a reputation for his love of younger blondes, three of whom he has divorced. A fourth, jewellery designer Jennifer Wade, 41, is his current wife.

His travelling one-man show, Alimony Tour, took to the road in 2009 to soften the financial blows of his acrimonious divorce to American psychotherapist Alyce Faye Eichelberger, awarded £12-million in a 2008 divorce settlement.

Cleese, born in a farming community outside Bristol, shares his £1.4-million Sloane Square flat, which he describes as the most valuable thing he owns, with Wade, Heaven, a ragdoll cat, and a "wonderful housekeeper called Rachel from Bulgaria".

When I was young, I spent a lot of time amusing myself. We moved eight times in my first eight years so I didn't form any long friendships, but I played with my stuffed animals and made up various games in the garden. I was always happy with my own company.

I'm trying to plough ahead with my autobiography, of which I've probably written 35000 words. I'm about a quarter of the way through. [The publishers] just say, "You must just do it eventually." Sometimes it flows very fast, and sometimes slower. Don't forget I'm quite good at writing dialogue, but I'm not used to writing for the printed page. I'm learning as I go along.

My father was a life-insurance salesman and my mother a housewife. Each had a very different sense of humour, and I inherited both. My mother's was quite black and we used to laugh at very black things. My dad had a very good turn of phrase.

I have a passion for lemurs. When I went to Clifton College, Bristol Zoo was literally across the way, and my favourite creature there was a ring-tailed lemur.

If I had to advise my younger self, I would say don't get married unless you have to. I'm on good terms with my first two wives, and extremely good terms with my fourth. My third, Alyce, always said that if we split up we would never speak. That suits me perfectly well.

I would like to be a spiritual person. I try to meditate as often as I can. I do think there is something more than the physical universe, but organised churches cannot tell you much.

Being better on the internet is a skill I'd like to develop, and becoming more patient. Touch typing would be useful. I mostly type with two fingers.

I could easily have been an academic psychologist. I'm fascinated by the mind. I don't think I would have been particularly good with fishes, but if I could have worked with animals in a zoo, or on conservation projects, I would have been very happy.

My greatest life lesson is that I should have taken more interest in my financial affairs. I never really wanted to know anything about them, other than do I have enough? I came from a generation of people who were not as interested in money as they are today. I would have been in a much better position at this age.

People always say how much I've done in my life, and it's not the way I feel about it. I sometimes read biographies of people who've fought in wars, or went exploring, or ballooning . slightly spectacular, adventurous things. My life had few of those. I have two or three talents which have enabled me to last in show business longer than most, but I certainly don't find any of those talents amazing.

I don't have the energy I had when I was 45. Sometimes I think I have to use my energy more intelligently, but you get older from the time you are eight years old, so you just have understand it's all part of the same process. Ageing does focus your mind more on questions like "Is there an afterlife?"

My most creative anger-management tip is remembering how little most of it matters. My early training was to suppress feelings of annoyance. I lose my temper very rarely.

I would have liked to have met Jan Smuts. He was a remarkable man and statesman.

Don't pretend to know more than you do. When I was younger, I always thought I should be better informed than I was. I used to pretend that I was, and when I started admitting my ignorance I found people were absolutely delighted to inform me better.

I used to get a lot of stage fright in the early days. I no longer do, just because I've done it so often. I think that is true of anything in life - get as much experience as you can (to face that fear).

I once met Charlie Chaplin and he signed a poster for me of a film he'd made, 'The Great Dictator'. I somehow managed to lose the framed poster as I was coming and going during my first marriage to (Fawlty Towers actress) Connie Booth. I think I moved in and out three times. It's the most valuable thing I've lost.

Jennifer and I have a great collection of stuffed animals. We probably have about 40 of them. They're immensely cheering and quite useless. Before we met, we both had collections of stuffed toys. I'm not sure what it is . perhaps they represent a gentler, softer childhood experience. -