Legend of the Casbah is gone 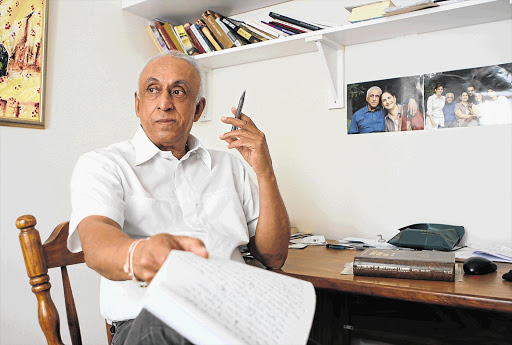 DOWN TO EARTH: Aziz Hassim, author of The Lotus People and The Revenge of Kali, photographed in his study at home in Durban
Image: Picture: JACKIE CLAUSEN

Durban author Aziz Hassim, who immortalised the city's historic Casbah district in his award-winning debut novel, The Lotus People, died on Friday afternoon. He was 78.

Speaking on behalf of the family, Hassim's son Anice said he had succumbed to pneumonia 10 days after being admitted to hospital.

Hassim, a former accountant, also wrote The Revenge of Kali and The Agony of Valliamma. He appeared in the 2012 film documentary Legends of the Casbah: Indian Rebels of the 1950s.

"The family are devastated. He was a very generous, very caring man. He was a true son of Durban," said Anice.

He said Hassim had lived a life of principle. "He was an inspiration to all of us. He never said 'I can't' and constantly reinvented himself.

"I think we're in a fortunate position, to be able to celebrate his life. He always lived life on his terms. He lived his life the way he wanted."

Author and academic Ashwin Desai said Hassim will "live forever because of The Lotus People.

"It was the best book on the Casbah. He lived on those streets and was able to bring the characters back to life. But Aziz was more than that. He was one of the last living men about town living without prejudice, in the most generous of ways.

"I grew up in front of him. He always referred to me as 'the snot-nosed kid'. For me, he will always be the suave, handsome man standing at Dhanjee's Corner in the Casbah on a Friday afternoon."

Satish Dhupelia, the great-grandson of Mahatma Gandhi, remembered Hassim as a kind man, generous with his time and wisdom, who was "everybody's friend". He added he was proud to have grown up in the same Durban of Hassim's youth. He admired the author for not being affected by success and fame. "The most important thing about him was that he still remained a down-to-earth person, with a sparkle in his eye. He always had a joke to share.

"We want his family to know that Aziz has an extended family in us and we share their loss."

"Hassim and I were very close friends. We emerged from similar kinds of experiences. Of course, he had the kind of uneasiness of the artist that made him unwilling to accept convention.

"He was a person who felt very strongly about issues of justice and things that affected humanity, and he expressed this in a creative way."

Hassim was buried at the Soofie Sahib mosque in Durban on Friday night. He is survived by his wife Zohora and their four adult children.