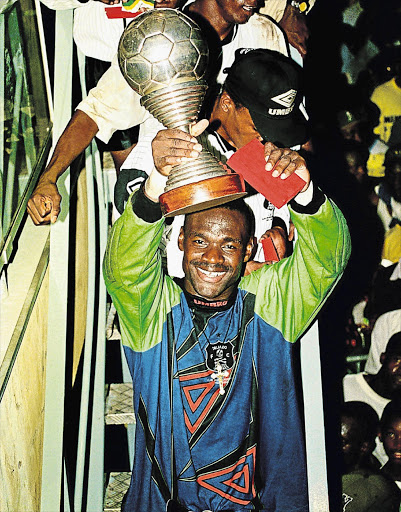 Okpara Williams: Fortunately for me, I'm in Egypt with the team. I was lucky to be part of the 1995 squad that won the first star. After a 2-2 draw with Asec Mimosas in the first leg at home, many people did not give us a chance. In Ivory Coast they said we were going to get a soccer lesson.

We ignored them and played our own game. Al Ahly will be disorganised if we score first knowing what happened to them in the first leg of the group stages (Pirates won 3-0).

MARK FISH: South Africa is waiting for the big one. The guys have done us proud so far. We expect them to continue doing well and hoisting the South African flag high. They are almost there - they are 90 minutes away from making it happen.

We hope the soccer gods will be with them to bring the title back home.

JERRY SIKHOSANA: There's no reason to change the game plan. Pirates should stick to their guns. My only concern is that they struggle to score goals or convert chances.

Personally, I am happy they are playing away from home because they are better when they are not in front of a gallery. They will miss Happy Jele and Andile Jali. But Lucky Lekgwathi should be able to close the gap at the back.

GAVIN LANE: I think we were lucky in 1995 when we went to Abidjan. We defended with our lives there and Pirates need to do the same in Egypt.

They need that early goal. It puts pressure on the opposition. If they can't do that they should not concede, because that's a problem as the opposition will rely on the huge support base they have.

Pirates will be missing two key players, but you have a big squad and you pay them well to step up to the plate.

EDWARD MOTALE: They don't need to panic. But they need to rectify their mistakes and improve on their weaknesses. In the first leg Pirates stuck too much to the game plan. They were not adventurous enough when the game plan didn't work. For example, Daine Klate kept trying to get crosses in but there was no one to get the headers in.

HELMAN MKHALELE: It's going to be tough, but not like in Abidjan. The class of '95 had conceded two goals, they have only let in one.

I hope coach Roger De Sa works on the mental strength, especially given the hostile crowd they are likely to face, which will be their biggest challenge. At the back, their defence needs to be on their toes. Dominique Da Sylva is a dangerous striker.

If Pirates stick to their quick short and medium passes to get into scoring positions, they should win.

BRUCE RAMOKADI: Their normal game should be the order of the day. The home team is under pressure, not Pirates. The expectation from the fans is enormous in Egypt.

It is here in SA as well, but Pirates are playing away, so they will be calm in that sense. The unfortunate part is that we conceded, but I wouldn't really call it a big blow.

PHIRI TSOTETSI: It will be a hell of a game. Pirates know they can't underestimate Al Ahly, the giants of African soccer. They must play with aggression up front, as in 1995.

The good thing is that all the players in Egypt have gained a lot of experience of playing in this tournament. So there is no need to complain about the absence of Andile Jali and Happy Jele.

The approach should be "let's get a goal first, then it will be the end of Al Ahly".

It is good to see South Africans travelling to Egypt. That will encourage the players. Pirates have been the best in this tournament. I see them making history by being the only team in southern Africa to win the Champions League, twice for that matter.

BRENDON SILENT: Pirates are not under pressure, but they need to believe in themselves. They need to score first, which will unsettle Al Ahly. The return of captain Lucky Lekgwathi will help tighten the defence. They need him because of his experience, especially in the absence of the injured Siyabonga Sangweni.

The absence of Happy Jele and Andile Jali will not really affect the team. It is an opportunity for the other players like Vierra (Lehlogonolo Masalesa) and Bibo (Thandani Ntshumayelo).

JOHN MOETI: Pirates must approach the match with a more attacking mind and try to get a quick goal. While most of the guys have been doing well, I was impressed by Senzo Meyiwa, Rooi Mahamutsa and Lennox Bacela, who played a key role in getting Pirates to the final. Bacela settled down quickly after joining in August.

I think Al Ahly will struggle to deal with the pace of Tlou Segolela big time. Pirates are a good team capable of embarrassing Al Ahly at home again to prove that the 3-0 victory during the group stages was no fluke.

The success of Pirates in this tournament has united the country. We are seeing some of the supporters of Kaizer Chiefs, Mamelodi Sundowns and Moroka Swallows rallying behind Bucs. That is the spirit of the Rainbow Nation.

VINCENT SOKHELA: The Class of '95 were underdogs. Now Pirates are underdogs, which is good. It puts pressure on Al Ahly. Pirates must start with a clean slate and play a normal game. But they have to score first, which will disrupt Al Ahly.