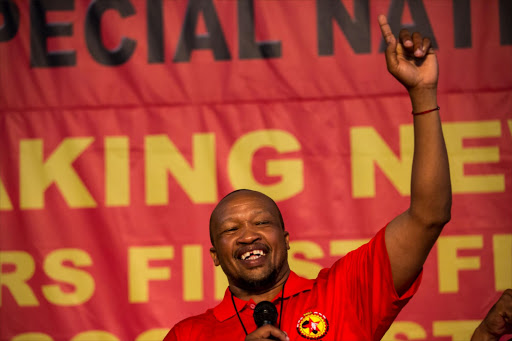 THE decision by trade union federation Cosatu's largest affiliate to break with the ANC is likely to hamper the ruling party's election campaign, especially in the Eastern Cape and parts of Gauteng.

The 338000-member National Union of Metalworkers of South Africa said on Friday that it was leaving the ANC-led alliance and would try to persuade other Cosatu unions to follow suit.

The decision is likely to hit the ANC the hardest in the Eastern Cape, especially in the Nelson Mandela metro where Numsa is the strongest organised political formation.

During the 2011 municipal elections, Numsa structures in the metro - which encompasses Port Elizabeth and the surrounding area - played a crucial role in keeping the local council from Democratic Alliance control. The ANC won the council by one seat.

Numsa's breakaway is also likely to hurt the ANC in the Ekurhuleni metro, east of Johannesburg, the union's largest region with more than 60000 members.

Numsa will now discourage these members and their families from voting for the ANC.

The party stands to lose 6000 campaign volunteers across South Africa because of Numsa's decision and will lose out on R3-million that the union set aside to help it in the election.

Numsa also said on Friday that it would withhold the R600000 monthly political levy to Cosatu and the South African Communist Party, and would not pay its monthly subscription of more than R900000 to the union federation.

Numsa national treasurer Mpumzi Maqungo said not a cent of the union's money would go towards the ANC election campaign.

"As long as I am national treasurer, we won't support the ANC ... I'm bound by this congress ... the decision can't be changed by the central committee. It can only be changed at the next Numsa congress in 2015," he said.

"It means we won't pump our resources. We won't pump money for buses, for T-shirts, no pamphlets ... we won't do anything that we used to do.

"Even to print ordinary 'Vote ANC' T-shirts costs millions. The resources we pumped into the Eastern Cape were more than what we put in other areas," said Maqungo.

Numsa general secretary Irvin Jim said the decision was taken after the tripartite alliance became dysfunctional. It was largely influenced by what he called the ANC's advocacy of "neo-liberal" policies.

He cited the ANC's adoption of the National Development Plan, the implementation of e-tolls and the failure to ban labour brokers.

Jim said Numsa members were free to vote for any party in next year's election.

"What we are not going to do is mobilise our members and persuade them to vote for the ANC. That we will not do. We have fooled our members and the working class a couple of times. So we think it is time to form an alternative ... Workers have had it up to here."

The union decided to form a "movement for socialism" to contest elections in 2019.

Numsa would also lobby Cosatu to leave the alliance. If that failed, Jim said, a new federation would be formed. "The time for looking for an alternative has arrived," he said.

The decision to withdraw support for the ANC was supported by all Numsa's nine regions and "took less than 30 minutes to be adopted".

But not all Numsa members are in favour.

S'fiso Maphumulo, a Numsa member at a Toyota plant in iSipingo, south of Durban, said the matter was never discussed with the rank and file.

"Workers have never given any blessing to the decision to withdraw support from the ANC or to pull out from Cosatu. We made it clear last month to regional organisers that we are opposed to these proposals."

Another Cosatu member from KwaZulu-Natal, who asked not to be named, said the decision was only discussed at shop steward level and not with ordinary Numsa members.

"This is a leadership decision. How are they going to convince Numsa members to leave the ANC? It's not going to happen."

Another group of Numsa members from the Ekurhuleni metro said they would never leave the ANC. "The ANC is ours," said one member of the group.

Said another: "If you want to steer a car in the right direction, you don't get out of the car. You remain inside. We are going to remain and fight within."

Numsa's decision is closely tied to dissension in Cosatu caused by the suspension of general secretary Zwelinzima Vavi, which the union tried unsuccessfully to reverse.

Jim accuses Vavi's opponents of taking orders from Luthuli House and the SACP.