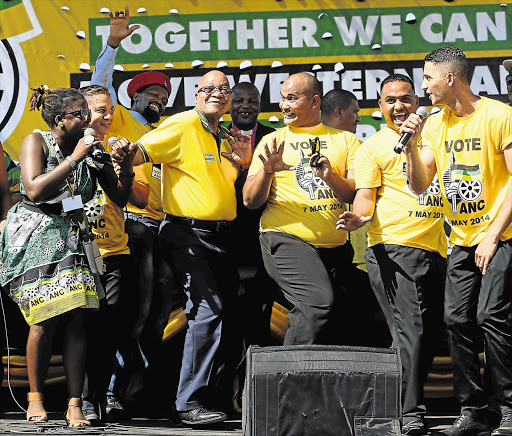 President Jacob Zuma celebrated his 72nd birthday on the Cape Flats yesterday as the ANC fought to break the Democratic Alliance's control over the predominantly coloured area ahead of next month's elections.

And a party it was, with minstrels adding colour and Cape flavour to the ANC rally held at the Vygieskraal Stadium in Athlone.

For the first time since the ANC started its election campaign, Zuma delivered a researched speech that focused on issues related to the coloured community of Cape Town. He had previously adopted a one-size-fits-all approach, repeating the same message at every rally .

He told the crowd thataffirmative action would protect and promote coloureds as well as Africans.

"You don't need to be afraid. Some are using swart gevaar [black peril] tactics," he said. "Coloureds, just like Africans, must also get jobs.

"We will make sure more coloureds are promoted, especially in this province."

He accused the DA-controlled Western Cape government of not caring for coloured people.

"This provincial government fails to support the minstrels, klopse and Malay choirs and refuses to agree to the historical right to march.

"Tweede Nuwe Jaar [second New Year] was the only day of the year that the slaves were allowed to be free for the day, celebrating their day of freedom. It is for this reason that the minstrels' associations have asked the national government to intervene to declare the minstrels' route as a heritage route. They are working with [Arts and Culture] Minister Paul Mashatile [to achieve that]," he said.

Zuma also touched on education. He lauded the crowd for having "fought" to keep 27 schools open after Helen Zille's government tried to close them.

The ANC in the Western Cape, he said, was concerned about crime, gangsterism and drugs in the area.

He reached out to the Muslim community, affirming the ANC's commitment to the struggle of the people of the Palestinian territories.

At the rally, a number of Cape Flats organisations endorsed the ANC for the elections.

The party's aim is to reduce the DA's majority to less than 50% and use the Cape Town vote to win back the province.

The ANC enjoys support in the province's rural areas and the predominantly African townships.

ANC provincial chairman Marius Fransman said the party's aim was to convince the Cape Flats community that Zille's government does not care about the poor.

"This is a community-endorsement rally. We could have easily convened in Delft and have 15000 people or in Khayelitsha and have 20000 people ... but this is about the Cape Flats, which is supposed to be a DA-controlled area," he said. "Obviously, it is very difficult to jump from 31% [which the ANC obtained in 2009] to 45% [which the ANC won in 2004] ... but we will increase significantly and will bring the DA below 50%."

Fransman said there were a number of factors that counted in the ANC's favour this time. He said the ANC had "effectively destroyed the Congress of the People - all their senior leadership and branches, all have come back to the ANC. We will get back the vote we lost to COPE in 2009."

The ANC paraded its latest recruit, former DA chairperson in the Cape Town metro and mayoral committee member Grant Pascoe, who defected last week. The party is hoping to use his influence in the Cape Flats to dent the DA's dominance.

"What Grant has shown ... and has admitted is what we always believed - that coloured people in the DA are just being used as voting fodder.

"There are many Grant Pascoes that are talking to us. Helen Zille has effectively destroyed the DA. Last year she said they will get 30% nationally and 60% in the Western Cape; now she is just fighting to control the Western Cape," said Fransman.