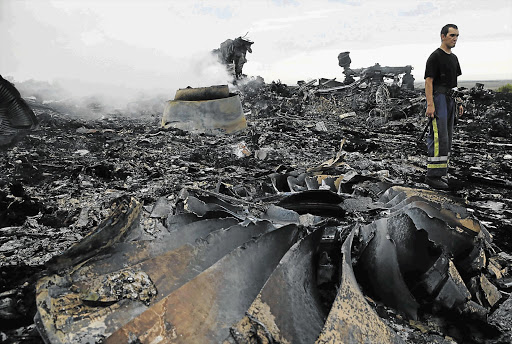 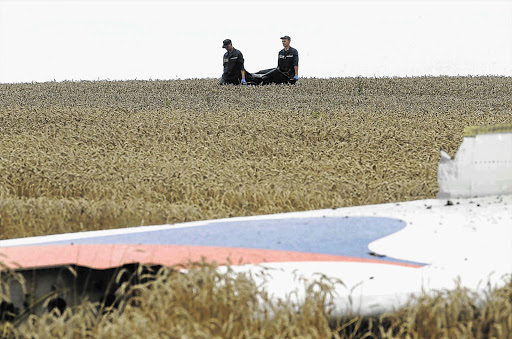 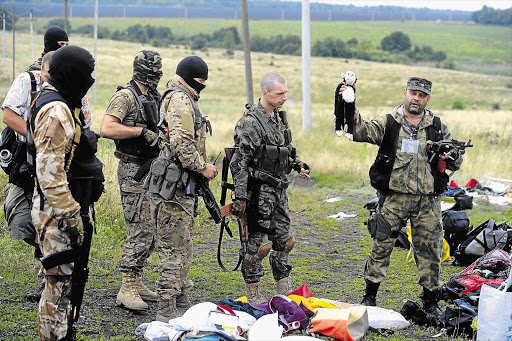 Bodies, books and debris from downed plane lie scattered over a huge swathe of farmland

They lie among the sun- bleached wheat. The bodies. Torn. Broken. Burnt.

Some are like manikins - twisted, turned and rearranged, their joints bent at impossible angles, their skin like dull yellow plastic.

There is no easy way to describe the final, scattered resting place of flight MH17.

It is a scene of horrors that stretches over many acres of this corner of eastern Ukraine - testimony to a plane being ripped up by a missile and then thrown 10km down to earth.

By Friday morning, many of the passengers had been found in one field and what remained of them were marked by wooden stakes flying small white ribbons.

Some are tangled in their seats, but others have been flung far away from the debris.

One woman's body is unimaginably scarred, but the red paint on her toenails is still smooth and unchipped and the skin of her one remaining foot has retained its lifelike lustre. The blonde hair of another passenger is in perfect condition, but her body has been split and torn.

A young boy's corpse is nearby. His white Tommy Hilfiger shirt is still clean, marked only by the blood near his head and shoulder. His face is well preserved and he has a strong brow and dark straight hair. But he has suffered a traumatic head wound.

Among the debris, the banal seems to be as striking as the death. There is an "I Love Amsterdam" T-shirt, a souvenir Paris picture frame, toiletries, food and clothes. All seem so fundamentally human and yet so far removed from the bodies scattered around.

Also there are books - a biography of former British soccer great Kevin Keegan, another of Ron Atkinson.

Here, the golden colour of the fields has in places been broken by uneven swaths of black. There is a summer rain and the sky is grey, but in one spot the field still smoulders. There is no freshness in the air. Instead, among the globules of melted steel, among the great turbines and pieces of fuselage, one smells only kerosene fuel.

The dreadful scenes affect not only the journalists here, but also some of the rebel soldiers on patrol. One, dressed in camouflage, moves among the wreckage, head bowed, gun by his side. He refuses to speak. He simply shakes his head.

A group of men, most of them wearing miners' helmets, march solemnly down the road, refusing to speak. They return in the same manner five minutes later.

This hell is not free from politics, though. Pavel Gubarev, the "people's governor" of the rebel-held Donetsk region, arrives with bodyguards and says he believes Ukrainian forces may have been responsible for the disaster.

"And here we need to be very careful, especially the international community, not to turn this into an international political scandal until the investigation is completed," he said.

Asked whether international investigators were on the scene, Gubarev said: "I haven't seen any yet. We are not going to hinder their work."

Nearby, two boys, a 15-year-old and another aged 16, play by a stretch of water. They claim to have seen the explosion.

"We saw how a missile was flying and then it blew up ... It [the plane] flies for another 20 seconds, then all pieces break off and it falls down," said one of the teenagers.

As the sun set on Friday night, the grim search for bodies continued. But tracking down the fragments of MH17 is a mammoth task. In a huge field of chest-high sunflowers behind the village of Rosipnaya, a large chunk of fallen wreckage has flattened the crop and created a grim clearing. Here appears to be the place where the section of the Boeing 777 which carried mail has fallen.

On the ground amid the metal are letters and parcels. One box has burst open, showing a new pair of bright pink trainers.

A stick with a white piece of cloth marks the spot where a body was found. Next to this are envelopes. One reads "Priorite" and has been posted to a man in Perak, Malaysia. Another is to a doctor in Perth, Australia.

And then there is another body. - ©The Daily Telegraph, London

UK, US implicate Russia in attack

Britain and the US have implicated Russia in the "unspeakable" missile attack on Flight MH17 as diplomatic relations reached their lowest point since the Cold War.

US President Barack Obama described the deaths of nearly 300 people as an "outrage" as he issued a stark warning to his Russian counterpart, Vladimir Putin, for supporting the separatists who are thought to have fired the missile.

British Prime Minister David Cameron said it was an "appalling, shocking, horrific" incident and added that "those responsible must be held to account". Both leaders called for Putin to allow the crash site to be "properly investigated" amid reports that armed separatists were denying investigators access.

On a day of fast-moving developments and growing recriminations between the East and the West:

Putin was accused of avoiding phone calls from world leaders, including Cameron;

The US was considering imposing further sanctions as Obama warned that he was prepared to "increase the costs" to Russia;

Footage emerged of a Buk anti-aircraft missile launcher being driven into rebel-held Torez in eastern Ukraine, just two hours before the crash;

Video and audio emerged purporting to contain footage of Russian-backed rebels saying they had mistakenly shot down the jet;

Putin categorically denied any link to the attack and suggested that Ukraine was partly responsible. "This tragedy would not have happened if there was peace in the country," he said; and

Britain sent air accident investigators to Ukraine along with specialist police to retrieve and repatriate corpses.

At the White House, Obama suggested that the missile launcher used to shoot down the plane was from Russia and that those who fired it may have been trained in Russia.

"A group of separatists can't shoot down military transport planes without sophisticated equipment and sophisticated training - and that is coming from Russia."

According to reports, a unit of heavily armed rebels has cordoned off a large section of the crash site and was denying access to international investigators. - ©The Daily Telegraph, London

The Netherlands was trying this weekend to come to terms with one of the worst aviation disasters in the country's history as grieving relatives gathered at a primary school attended by some of the 22 Dutch children killed.

The De Klimroos school in the southern town of Roosen-daal opened on the first day of the summer holidays to provide counselling for those who were close to the children. "They're inconsolable," said a resident, declining to give her name.

"This is a small country and nearly everyone is affected."

A total of 189 Dutch citizens were among the dead, nearly two-thirds of those killed when the Malaysia Airlines passenger jet flying from Amsterdam to Kuala Lumpur was shot down.

Flags were lowered to half-mast across the country as Mark Rutte, the prime minister, cut short a trip to Germany to fly home. "The whole of the Netherlands is in deep mourning," he said.

Huib Gorter, vice-president of Malaysia Airlines, said that the company was planning to fly relatives to the site where the aircraft came down, prompting Dutch journalists to demand how their safety would be guaranteed.

"We're working on logistics and whether it's feasible," said Gorter. "It is an extremely complex area where the plane went down."

Gorter said that the airline was giving victims' relatives $5000 (about R53300) each for their immediate needs. Some relatives are being put up in a hotel near the airport, where counsellors are helping them to try to cope with their grief.

At Schiphol airport, friends of those killed laid flowers in tribute to the dead.

An unsigned note in English left among the flowers summed up the mood: "Holland is in mourning. The world is in shock.

"This should never have happened. RIP." - ©The Daily Telegraph, London

Russian President Vladimir Putin has one last chance to show he is serious about helping rescuers recover the bodies of the victims of the downed Malaysia Airlines flight MH17, the Dutch prime minister said yesterday .

"He has one last chance to show he means to help," said Mark Rutte, minutes after what he described as a "very intense" conversation with the Russian president. Rutte said that the leaders of Germany, Britain and Australia also shared his view.

"I was shocked at the pictures of the utterly disrespectful behaviour at this tragic spot," the Dutch leader said, referring to allegations that bodies of the passengers, including 189 of his countrymen, were being dragged about and allowed to rot at the scene of the disaster. - Reuters