Nudes take on prudes in the battle of Trafalgar 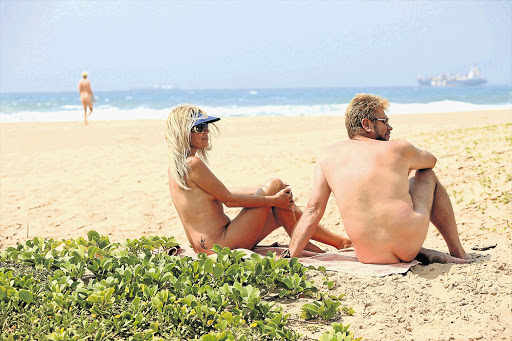 NAKED AMBITION: Celeste and Daniel de Wett from Vereeniging, Gauteng, caught a few rays on Umhlanga's unofficial nudist beach in KwaZulu-Natal this week. Gauteng naturists and others support the proclamation of a nudist beach further down the South Coast at Trafalgar
Image: JACKIE CLAUSEN

Naturists say they will continue to bare it all on a KwaZulu-Natal beach even if they fail in their bid to have the piece of shoreline legally declared a nude beach.

The issue of nudity on Trafalgar beach on the South Coast was the subject of public hearings this week by the Hibiscus Coast municipality.

Judging by strong opinions on both sides of the debate, the question has created a stir among locals.

The residents appear to be split down the middle on nudity on the beach.

Athol Lutge, the chairman of the South African National Naturists Association, said residents of Trafalgar had practised nudity on the beach for at least 20 years and he believed they would continue to do so.

But he said it would be far better to legalise the nudist beach, as it would make it safer and allow naturists to prevent unauthorised photographs being taken of them.

Lutge said it would also boost the economy by attracting international tourists to the area.

But anti-nude activists said they did not want to look at "drooping boobs and buttocks".

Trafalgar home owner Reyna Joubert drew loud applause at the hearing when she suggested the naked sun worshippers would be an eyesore.

"According to our bylaws, nudity is not allowed," she said.

"If people want to be nude, I have no problem with it. I walk around nude in my house.

"But when I look at myself in the mirror, I think I look like those old naked people on the beach. Everything droops.

"And I don't want to look at drooping boobs and buttocks on our beach."

Tomorrow is the final day for submissions on the issue and then the decision rests with the municipality. If the naturists are successful, Trafalgar could become as famous as South Africa's Sandy Bay, the secluded nudist beach near Llandudno in Cape Town.

The naturists have received the support of visitors to another of KwaZulu-Natal's unofficial nude beaches, near Umhlanga Rocks.

This week a group of 14 naturists from Gauteng were spending a week's holiday at Umhlanga. Group leader Neels Theron said they supported the Trafalgar bid.

"We have the right, as naturists, to have a beach where we can be naked," he said. "There are already so many places in Johannesburg where naturists can get together, but KwaZulu-Natal still seems very conservative."

Theron said legalising some beaches would create a safer environment and give more control.

"At the moment, if someone comes here and starts doing something funny, there is nothing we can do about it. We can't chase that person away."

The group, whose members travel from Gauteng twice a year, did not attend this week's hearings. One member, a buyer for a supermarket, sent a submission by e-mail, however.

If the nude beach gets the go-ahead, visitors expecting to see young toned bodies strolling the shore are likely to be disappointed.

"We are not models," said Lutge, 61. He said most South Africans who bared it all at nudist resorts and beaches were "an older crowd".

The challenge was to attract a younger crowd.

His 18-year-old daughter, who used to strip down as a child, no longer thinks "naturism is cool".

"In our time, flower power and nudity were the in thing," said Lutge.