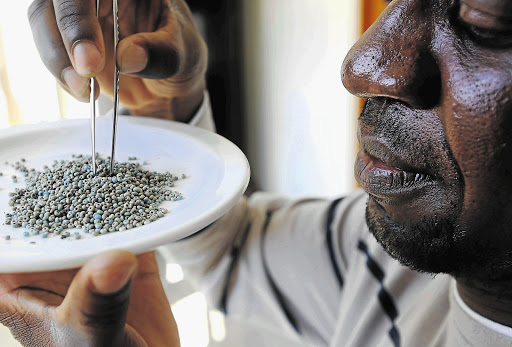 A Small packet of glass beads sits in a cabinet alongside Dr Shadreck Chirikure's desk at the University of Cape Town.

Collected from a hilltop in Zimbabwe by the research team he leads, the beads are part of a groundbreaking discovery that could shatter most of what is known about Southern Africa and one of its most lauded heritage sites.

For a long time, Mapungubwe in Limpopo has been hailed as the site of the region's first class-based society, where the leaders were separated from the rest by dry-stone walls.

But in May last year Chirikure and fellow archaeologist Munyaradzi Manyanga - from the University of Zimbabwe - stood at the foot of a hill at Mapela, and knew they had to start digging.

Their discovery could prove that Mapela is an older and more interesting site than Mapungubwe. As the research gathers momentum and receives more recognition, Mapungubwe's status as a tourist attraction and research site could be threatened.

Chirikure and his team were effectively following up on the discoveries of archaeologist Peter Garlake - famed for busting the myth that Europeans had built Great Zimbabwe - who had begun mapping Mapela Hill in the '60s. Five decades later, Garlake's incomplete map gave Chirikure a starting point.

"When we got there, the first thing that surprised us was how big the hill was and the fact that it was massively stone-walled.

"We even wondered at first if we were at the same place where Garlake had been. We were at the bottom of the hill looking up. It is 90m high and is terraced along most of its contours."

The two men climbed to the top and realised that Garlake had mapped only the top section. "This was an incredibly exciting moment for us," said Chirikure. "We knew we were onto something."

Two months later, he returned with a team of students from UCT, the University of Zimbabwe and Midlands State University, also in Zimbabwe.

Chirikure quipped: "The first thing you do is some gardening to make sure the 'road' is vaguely accessible. Let's just say I wouldn't borrow your car for this journey, as it would come back unrecognisable. The nearest roads as we know them are 13km away."

But once there, the layers of Mapela Hill opened up like a treasure chest of clues, history and a new way of thinking about what had happened here.

"The deepest trench we excavated was 2m down. What did we find? Glass beads, ceramics and grains of sorghum seeds. So we asked: 'What could the significance of this place be?'"

They didn't just find "some glass beads". They found thousands upon thousands of them.

"We got material for radiocarbon dating and suddenly it became clear: The enormous stone-walled terraces were constructed in the 11th century - almost 200 years before Mapungubwe - and it was bigger, so how could it be a province under the power of Mapungubwe?"

Chirikure and his team's research paper spells it out: With a hilltop and flat area occupation since the 11th century, Mapela exhibits evidence of class distinction and sacred leadership much earlier than Mapungubwe and its neighbouring village, known as K2, the supposed propagators of the Zimbabwe culture.

"This means we are underestimating the very nature and characteristics of urbanism in southern Africa over a span of 800 years. It opens our eyes to places that have been edited out of our very understanding of history," Chirikure said.