Hogarth on naked rebels, cults of personality and Irvin Jim 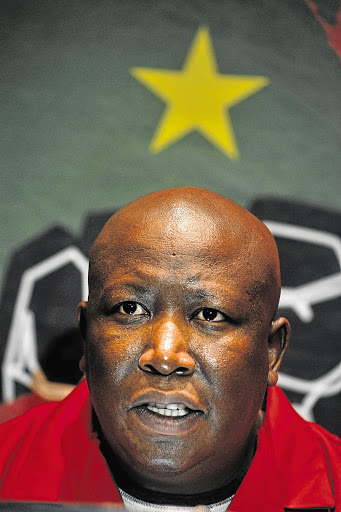 A mask of modesty to conceal the cult of CICness

The following is a Christmas message from the self-appointed Commander-in-Chief of the Rebels in Red Berets: "The Commander in Chief ... humbly requests that revolutionaries engaged in land occupation struggles not to name the new neighbourhoods after his name.

"The CIC is requesting that fighters and all revolutionaries not to inculcate the undesirable culture of personality cult by naming new settlements after him."

In short, what the Louis Vuitton revolutionary is saying is that it is OK to steal and occupy someone else's land without permission as long as those who do that do not name their new shantytowns after him.

The CIC seems to have taken to heart the lessons he learnt in his previous life as the chief prefect of the ANC's kindergarten.

Remember that at the 2008 youth league conference, where he was first elected president, one of the delegates disgraced the whole event by posing nude in front of media cameras?

Well, with the Rebels in Red Berets holding their first conference in Bloemfontein this weekend, the CIC is taking no chances.

He has imposed a strict code for delegates, which states, among other things: "Nobody shall within the premises of the assembly take off clothes to demonstrate anger or unhappiness of any kind whatsoever, or bring banners, posters or placards in support or against any candidate."

Takes two to Unite, at least

Also meeting this weekend is yet another grouping that hopes to bring about a Venezuelan-style socialist revolution to South Africa.

Irvin Jim, boss of the National Union of Metalworkers Union of South Africa, was hoping to rock South African politics with the launch of his "pro-working class" United Front this weekend.

But poor turnouts at many of the planned pre-launch events across the country over the past month have forced him to downgrade this weekend's launch to a mere "people's assembly".

When asked whether the delay was an indication that his initiative had failed to gain traction, Jim said: "I must be very sincere and absolutely honest. The response on the United Front call has been very big - to a point where we could be launching this weekend. There is no crisis."

He does sound like his erstwhile comrades in government and at Eskom, doesn't he?

The cabinet is upset that the whole country now believes that No1 is hiding from parliament because he is terrified of the smaller political parties pestering him to pay back the money used to build his Nkandla palace.

In a statement this week, the cabinet spoke of a "misperception" that the Singing President refuses to answer parliamentary questions and said that, in fact, he regularly responded to MPs' questions - as long as they were written down.

"Those who prevented the president from orally answering questions in the National Assembly have no moral grounds to twist the facts and suddenly claim that it is the President who does not want to orally reply to Honourable Members' questions," said the cabinet.

But if No1 is not afraid, why doesn't the cabinet encourage him to go to the House?

Who's lying about the sitting?

What the cabinet does not say is that the person in charge of that process, Speaker Baleka Mbete, is the ANC national chairwoman, with close relations to Zuma. Surely she can easily organise a sitting if she wants to?