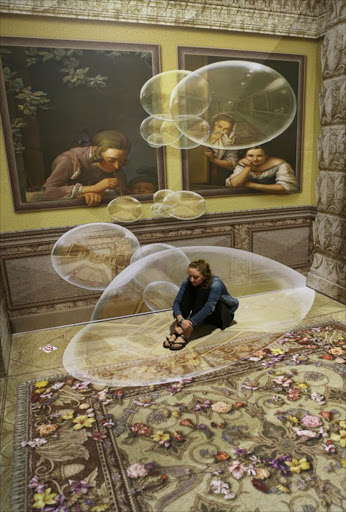 You're encouraged to interact with the art at 'Incredible Illusions' exhibit, which is on at the V&A Waterfront.
Image: Ruvan Boshoff

Capetonians are capturing moments of themselves hiking the Grand Canyon‚ featuring in The Last Supper‚ and riding a camel without breaking a sweat.

An interactive 3D painting exhibition by world-renowned American pavement artist Kurt Wenner‚ currently on display at the V&A Waterfront‚ is making all of this possible.

Incredible Illusions is different to most art shows.

Instead of the typical museum instruction to “look‚ but don’t touch” people are encouraged to interact with the paintings for a photograph that will make it look like they’re actually there.

Wenner said that the art was chosen specifically "to provide an interactive experience to the public".

“I wanted to share to [with] them the possibilities art offers to change our environment with imagination‚” he added.

Wenner said he got the idea for the showcase after setting up a museum in the Playa Del Carmen in the Mexican Riviera‚ and decided to start the showcase in Cape Town because of how impressed he was with the city when he first visited some years ago.

“I grew up in Santa Barbara‚ California‚ which is similar in many ways‚ although I must concede that Cape Town is even more elegant and spectacular. Naturally‚ I was delighted with the opportunity to display my work in such an enviable venue.”

For those who crave a more scholastic angle‚ there is also an educational zone that provides a history on pavement art and shares the crucial role that geometry plays in the creation of 3D interactive artwork. More creative museum-goers can learn about the foundation of 3D art and make their own masterpiece at the Art Jamming zone.

While Wenner was aware of the political situation in South Africa‚ he said that he generally avoided politics in his art because he felt “that my message is one of inclusion and hope rather than protest”.

“The whole world seems to be unstable at the moment and there is certainly plenty to protest about across the globe.”

The exhibition started on April 4 and runs until July 23. — TMG Digital/TimesLIVE

• Sealy McMurrey is on an SIT Study Abroad programme and produced this story in association with Round Earth Media.